They are venomous, after all, some more than others.

The bite of the king baboon spider (which looks like a tarantula and lives primarily in Tanzania and Kenya) is not lethal, but it does produce a lot of pain in hapless victims. In this new effort to discover why, the researchers conducted a proteotranscriptomic analysis of the venom to identify possible peptides that they thought might be involved in producing pain. They identified one known as Pm1a (prior work has shown that it is typically involved in modulating dorsal root ganglion receptors in nerve cells.) They then synthesized the peptide to allow for NMR spectroscopy to ascertain its structure.

Next, they studied the impact of the peptide on mice by injecting a small amount into a toe. That allowed them to see that the peptide modulated ion channels and incited excitatory sodium currents. At the same time, it also reduced potassium currents that are typically involved in inhibiting excitatory currents. The end result was hyperexcitability in nerve cells, which, to the mouse, meant pain. To conclude their work, the researchers created a mathematical model of the peptide and its impact on nerve cells to further prove that it was the main driver of pain in victims of the spider’s bite.

The researchers also note that the hyperexcitability they saw in the mouse nerve cells very much resembled the type of hyperexcitability seen in people who experience chronic pain. They suggest that a better understanding of how spider venom can produce similar results could perhaps lead to a way to reduce pain in these patients.

I used to work down the hallway from a lab studying conotoxins. They’d collect the venom from cone snails, chemically separate its components, and then inject each fraction into a mouse to see what would happen. Sometimes nothing. Sometimes excruciating pain. Sometimes bleeding from the eyes. Sometimes they’d fall asleep. Sometimes they’d die instantly. It was fascinating stuff that yielded all kinds of interesting molecules with useful neurological effects. But you had to sometimes wonder, who was the monster? The organism that produced the venoms, who lived in a place these mice would never encounter, or the investigator who imported the toxins and afflicted them on hordes of mice, for the betterment of humankind?

Besides, the King Baboon spider has such a cute and adorable face. (No, no, no, arachnophobes. Don’t click through.) 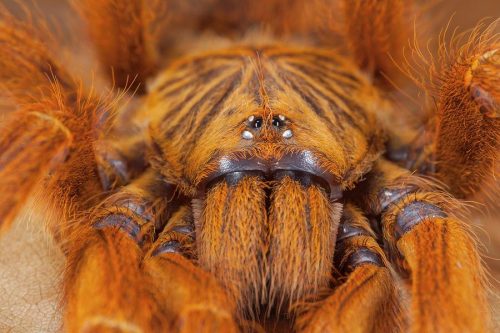 Rebecca Watson takes on both Joe Rogan and Jon Stewart and clobbers them » « Pay attention, debaters