Here’s another reason to avoid Florida: these idiots are on the road. Apparently there was a bit of a wrangle with one person tailgating, another person throwing a water bottle, and then this guy, Eric Popper, decides that the appropriate response is to fumble in the center well and pull out a gun, and proceeds to unload 11 shots sort of vaguely in the direction of his enemy.

I’m impressed. He shot up his own car door and window, dashboard, and windshield. He has his eyes closed and is just firing wildly. Tres macho. 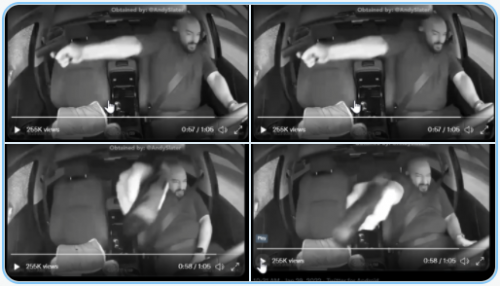 Astonishingly, or maybe not since this is ‘Merica, this was the outcome.

According to the arrest report, both the victim and Popper reported the incident to the police. During the investigation, Popper told state troopers he believed he was shot at so that was why he began shooting. The other driver said he did not have a firearm but said he did throw a water bottle at Popper’s car. Surprisingly, there were no reported injuries. Both parties were released at the scene.

Were they given back their driver’s licences and allowed to get in their damaged vehicles and drive away? Neither of these guys should ever be allowed on the road again.

There are so many symptoms of brain rot around us » « Most people would agree we don’t come from monkeys, and we didn’t Big Bang, right