Happy Martin Luther King Day! Or, more accurately, Racism-Is-Over-Because-We-Named-It-After-A-Black-Man Day! Here in the Great White North, our big state newspaper honored the man by publishing a column by Katherine Kersten, claiming that ethnic studies programs at a university are an extremist boot camp. 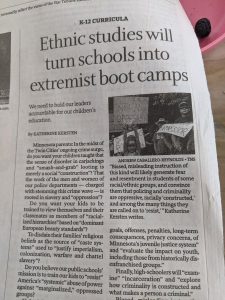 You probably don’t know who Katherine Kersten is. When I first moved to Minnesota and started reading the Minneapolis Star-Tribune, which is generally a good paper, two aching sores regularly leapt out at me. One was James Lileks, the whitest white man in America, who also seemed to be sending most of his columns from his cozy middle-class cottage in 1950 via a time machine (I could think of so many better uses of a time machine…), and the other was notorious racist conservative Katherine Kersten. Everyone knew she was a pretentious conservative of the William Buckley stamp, the Star-Tribune knew about her biases, the Star-Tribune regularly got protest letters about her, but the Star-Tribune regularly published her hateful opinions. I don’t know what was up with that, her presence seemed very Midwestern, like the paper’s dreadful great-aunt that they had to invite to every Thanksgiving, even though we knew she was going to bring her stale, tasteless hot dish that no one would eat because, as she would constantly tell us, she’d added a bit of mail-order cough syrup and chopped almonds because they were full of laetrile to keep the cancer away.

I used to write about her every once in a while. She complained about atheists, because obviously we have no sense of right or wrong. She was always complaining about the university, because we had all these diversity programs (I imagine that right now she’s fuming over Critical Race Theory, but I don’t know, because I stopped reading her). Oh boy, did she complain about the Muslims in Minnesota. Yet, despite constantly presenting herself as the voice of the oppressed white people of the country, she also complained about the universities cultivating a culture of victimhood.