The contretemps du jour on Twitter is an attempt by TERFs to take over a trans-inclusive bar in Edinburgh (Meb is the bartender who politely threw them out). Marion Millar, a notorious transphobe who is currently awaiting trial for hate crimes against trans people, was one of the organizers who “innocently” (yeah, if you believe that you’re pretty darned gullible) booked a night out with the girls at Doctors, a pub in Edinburgh. 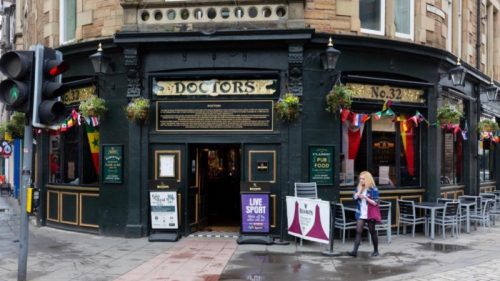 That would be fine, even TERFs get to enjoy some fish & chips and a pint now and then, except…they saw this as an opportunity to hand out inflammatory flyers and put up gender critical stickers in the rest room and argue with the other patrons and the bartender.

Here’s a good summary of the evening.

Doctors bar in Edinburgh and specifically their manager have come under fire from a torrent of abuse from transphobes on social media who have even been review-bombing the bar on Facebook etc. This after a group of transphobes went to the bar wearing transphobic campaigning t-shirts and armed with leaflets which they attempted to litter around the place. They were politely asked to leave, refused and were escorted out by police.

They got what they wanted, to provoke and disturb other people and get in the news with their brand of indignant hatred, and the staff at the bar dealt with it as responsibly as they could. They also found a target for their hate to focus on, Meb, and an exciting new hashtag they can poison.

If ever I find myself in Edinburgh again, I’ll definitely seek out Doctors and give them my custom. They sound like good people.