Answers in Genesis is fond of a peculiar metaphor: portraying secularism and Christianity as two castles in a bitter war. You can find lots of cartoons at their site illustrating this binary worldview, but the latest adds a new flag to the array of banners flying from “secularism”. 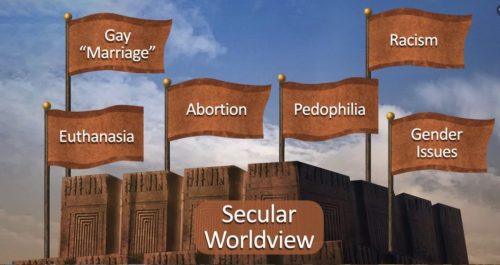 Yep, “Pedophilia” is new. These guys think that if you’re not Christian, you’re a pedophile…conveniently ignoring all the Christian preachers who’ve been exposed as sexual abusers. As summarized by William Trollinger:

One other thing about Ham’s fortress image. In Righting America at the Creation Museum Susan Trollinger and I argue that Ham and AiG and the Christian Right hold to a radical binary. In this binary the world is divided into two groups, Christian and Secular. Each group is identified with a set of linked terms that necessarily are the opposite of the other group’s set of linked terms.

So, according to this image, to be secular is to be a racist pedophile who supports the killing of babies and the disabled, and who suffers from gender confusion. To be Christian is to be “color-blind,” anti-pedophiliac, life-affirming, and very clear on the gender binary and one’s place within it.

What’s going on here? Do secularists have a reputation for raping babies or being racist? No, this is just propaganda. If you’re wondering where it came from, the answer is obvious.

Referring to the image displayed here, which Ken Ham has circulated via Twitter and Facebook, a friend asked if, by adding the “pedophilia” flag to the “secular worldview” fortress, Ham “is trying to appeal to QAnon” devotees?

It seems obvious that the answer is yes.

That site then links to an insane video filmed at Ken Ham’s Ark Park by a rambling QAnon devotee — it’s a maddening mess by a guy wandering around ranting at a camera, with the permission of AiG, blithering on about God wanting Trump to have two terms, etc. AiG has been suspiciously quiet about it all, not publicly speaking out for or against QAnon, while it’s clear where their sympathies and pocketbooks lie. It’s Q that has been demonizing Democrats, liberals, and anyone sane by accusing them of being pedophiles who drink the blood of children, and now AiG pops up and libels secular folk as pedophiles? It’s not hard to see who they’re catering to.