Forgive me, I include a photo of a spider down below. Maybe the fact that it is rather blurry will soften it a bit — I took it before sunrise when everything was a bit dim, and I just did a casual handheld shot. What impressed me, though, was the web, which is about 60cm across. Last night, this Argiope‘s web was a tattered broken mess, with big holes punched in every quadrant (the spider had a busy day catching bumblebees). When I went to bed, it was a pathetic few radial strands with a still intact stabilimentum, and the spider calmly poised in the center, mistress of a ruin.

I was up this morning before sunrise, and thought I’d take a quick look at the wreckage. Mirabile dictu, the orb web was restored, pristine and perfect! She apparently had a busy night. 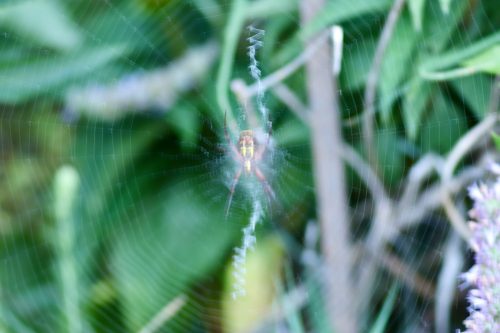 Yeah, I know it’s a bad photo. I had the aperture wide open and a flash, but trying to do it without a tripod was a mistake. I might try again in an hour once there is a little more light.

This might be a better picture, with plenty of light, but it was tricky to take — the web isn’t quite planar, and there was a bit of a breeze moving it around. 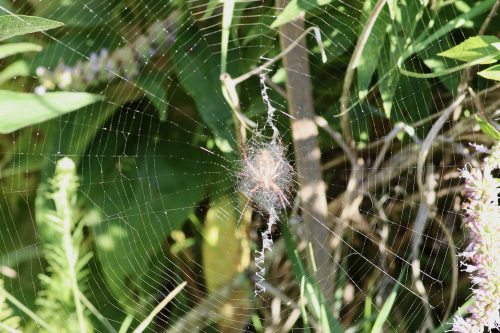 The success of Aubrey de Grey baffles me » « Patron Q&A coming up on Sunday!