They’re bringing back the chinook salmon in Washington state rivers, where the populations have been destroyed by hydroelectric dams, among other things. 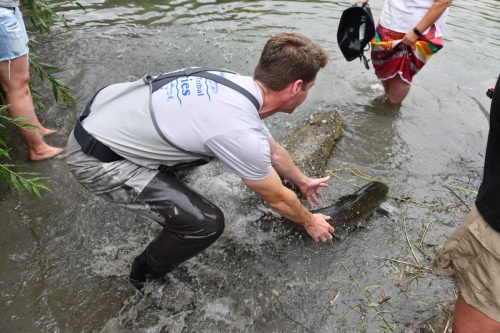 Conor Giorgi, Anadromous Program Manager at the Spokane Tribe of Indians, coaxes one of 51 Chinook salmon into the Little Spokane River, Friday, Aug. 6, 2021. Spokane Tribe of Indians, Washington Department of Fish & Wildlife, Inland Northwest Land Conservancy released the adult Chinook salmon from the Wells Salmon Hatchery into the river. Salmon have not been in the Little Spokane in 111 years. This is part of a larger effort to reintroduce sustainable salmon populations above Chief Joseph and Grand Coulee dams.

Although, I have to ask, did they really have to bring up the Program Manager’s sexuality in the text? I say that as someone entirely sympathetic with the anadromous lifestyle, and who would be swimming back to the sea myself if I weren’t so darned timid and straight-laced (I’d probably call myself diadromous, actually, I’m open-minded about which way you swing).

We’re gonna need a bigger incubator » « Bumps and lumps and crannies, oh my