Well, this story was quite informative. Today I learned all about “poppers”, or alkyl nitrites, and it tells you everything you need to know about me that I’m so straight that I had no idea that they were popular in the gay community. I never saw ads like this, or they made no impression on me at all. 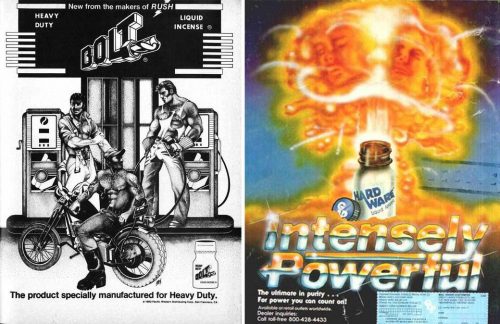 I have heard of Tom of Finland, however, I’m not totally clueless.

Strangely, the leading manufacturer of poppers in the US is another straight guy, like me.

Everett Farr, 65, is not the person you might expect when you think of nitrites and queer history. For one thing, he says he’s never tried poppers. For another, he’s straight, married, and has two adult children. He lives in a big home in a ritzy Pennsylvania county and owns a few cars, including a Corvette the same yellow as a bottle of Rush. But he’s not exactly flashy. When he met me at the train station near Philadelphia to drive me over to his plant in the last week of June, he was wearing shorts and sneakers and driving a modest, cluttered blue passenger van. The Corvette was parked inside the factory, covered in a layer of dust.

Except I don’t own a yellow Corvette or live in a ritzy place in the country. But like him, I’m not going to try alkyl nitrites — people with heart disease probably should avoid potent vasodilators. I see no problem in making them available to healthy people who want to experiment, though. I agree with this fellow:

Canada has required prescriptions for alkyl nitrites since 2013, and both the UK and Australia have come close to doing the same in recent years — moves that prompted backlash in those countries’ gay communities. One conservative British MP, Crispin Blunt (uncle to actor Emily Blunt), gave a speech in Westminster “outing” himself as a poppers user and calling a potential ban a “fantastically stupid” idea that would only fuel the black market. In Australia, the LGBTQ media dubbed it “an attack on gay and bisexual men” and a “war on bottoms.”

Zmith, the British writer, doesn’t believe the regulations governing poppers are motivated by anti-gay sentiment, but instead by “the complete madness” with which Western governments approach drugs — tolerating some dangerous substances, such as alcohol and tobacco, but cracking down on others.

Complete madness is right. You know that bans on these drugs are motivated solely by the fact that gay folk use them, not about health or safety — it’s all about Puritan hypocrisy.