The first odd thought to cross my mind was that I hope my fellow cissies haven’t been up to shenanigans again. With big chunks of the western US and Canada, which are populated with idiots (just like the rest of the world), you never know when someone may have decided to celebrate the identification of bits of differentiating tissue in an embryo by setting off explosives in tinder-dry terrain. You know, like the El Dorado Fire last year. 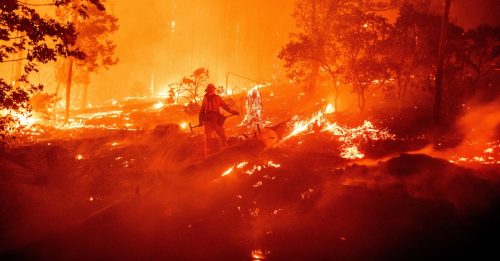 A firefighter died in that conflagration, but you know, it was important that a sacrifice be made to the genitals of the fetus. I don’t quite get it; when we were having kids in the 1980s, we generally didn’t care whether we had a boy or a girl, and if we were asked, we just used our tongue and teeth and lips and vocal cords to make complex sounds associated with statements about bodies. I don’t think we ever set anything on fire over it. Especially since the consequences of igniting the landscape are so dire.

“Not guilty”? I’d be really interested to hear the reasoning behind that one. The people who lost their homes and the family of the firefighter who died might also be curious.

The conflagration, which authorities call the El Dorado Fire, started in the park of the same name on September 5, 2020, near Yucaipa, California, according to officials. It burned 22,680 acres, and killed Charlie Edward Morton, who worked with the San Bernardino National Forest for 14 years. Five homes and 15 structures were destroyed; four residences were damaged. The wildfire also resulted in 13 injuries. Two firefighters were hurt, Anderson said.

Please stop dithering, CDC and everyone » « “Phil brings humanity and empathy to every character he creates”