She was an attractive pop-singer in the 1970s who became the face of intolerant homophobia. I don’t remember any of her songs, but I sure remember how much she was a running joke among the kinds of liberal hippies I hung out with. 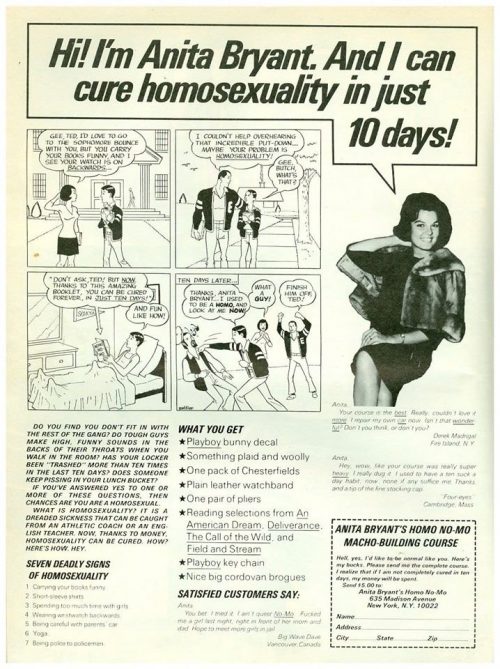 (Oh, right, the “your watch is on backwards” thing. You see, back in the Old Days, we wore timepieces called “watches” on our wrist, and most normal people wore them with the face on the dorsal side, so you’d hold your arm straight out to see the time; some people wore them with the face on the ventral side, so you’d bend your wrist back when you wanted to know what time it is. This is a difficult difference to grasp for people who may not know what a watch is.)

But really, I did not know anyone who didn’t think Anita Bryant was a creepy fanatic. She had her fans, obviously, but she was equivalent of a TERF nowadays — yeah, she has her following, she was promoting awful laws, but we were sure she was on the wrong side of history. It’s nice to see that confirmed.

She’s an old lady of 81 now, still just as rigid in her thinking (definitely not a cool grandma), and still a committed homophobe. It’s satisfying to know that she lived long enough to see her granddaughter, Sarah Green, come out to her face.

Toward the end, Green talks about her relationship with Bryant, who was a doting grandmother; Green says she once thought Bryant didn’t really hate LGBTQ+ people, but she started to look at her grandmother differently when Green realized as a teen that she herself was gay.

She had no intention of coming out to Bryant, but she was spurred to do so on her 21st birthday. Bryant sang “Happy Birthday” to her granddaughter on the phone and told her that if she had faith, the right man would come along. “And I just snapped and was like, ‘I hope that he doesn’t come along, because I’m gay, and I don’t want a man to come along,’” Green recalls.

Bryant responded by telling Green that homosexuality is a delusion invented by the devil and that her granddaughter should focus on loving God, because that would make her realize she’s straight.

“It’s very hard to argue with someone who thinks that an integral part of your identity is just an evil delusion,” Green says.

And now Sarah Green has had the joy of announcing her engagement to another young woman!

Bryant knows Sarah is engaged to a woman, said Robert Green Jr., Sarah Green’s father and Bryant’s son, says on the podcast. When he told his mother, he notes, “All at once, her eyes widened, her smile opened, and out came the oddest sound: ‘Oh.’ Instead of taking Sarah as she is, my mom has chosen to pray that Sarah will eventually conform to my mom’s idea of what God wants Sarah to be.”

Sarah Green says she doesn’t hate Bryant but feels sorry for her. “I just kind of feel bad for her,” she says. “And I think as much as she hopes that I will figure things out and come back to God, I kind of hope that she’ll figure things out.”

That’s even better than a pie in the face.

I blame Canada » « The kind of strength we need