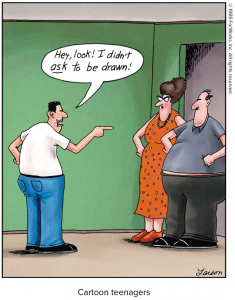 This is a bizarre article: titled Spare a Thought for the Billions of People Who Will Never Exist, subheading “As world population growth slows, the never-conceived are the ultimate forgotten ones.” I thought the anti-choicers were unbelievable with their nonsense about “unborn children”, but this takes it up a notch to “unconceived children”. Really? I have to give a thought to hypothetical people whose defining characteristic is that they will never exist? The author says we should consider this scenario:

A couple decides to have one child instead of two, or none instead of one. This happens all over the world. Billions of children are never conceived. How real is the loss of a life that never began? Is there a right to exist? Is there an ideal size of the world population?

There is no loss of a life that never began.

Things that don’t exist don’t have a right to exist.

I’m unimpressed so far. It’s a lot of wrestling with abstractions. We should consider the plight of people who do exist before these kinds of weird hypotheticals. Apparently there is some serious philosophical work on this one, though.

The late University of Oxford philosopher Derek Parfit wrestled with the question of the world’s ideal population in an influential 1984 book, Reasons and Persons. He didn’t delve into the carrying capacity of the planet, and he stayed away from the issue of abortion, which occurs after conception and thus raises a different set of concerns.

In an abstract, theoretical way, the British thinker presented what he called the “Repugnant Conclusion.” Here’s how he stated it: “For any possible population of at least 10 billion people, all with a very high quality of life, there must be some much larger imaginable population whose existence, if other things are equal, would be better, even though its members have lives that are barely worth living.”

Fine. So if you’ve got X billion people living comfortably, could you handle X+1 billion people living slightly less comfortably? Which would be better? I can imagine this being a relevant concern if you are planning population policy — but the purpose there would be to figure out how to guide the reproductive choices of people who exist. The amount of thought you should give to people who don’t exist is zero. It’s very twisty to expect people to not forget the never-conceived, since there was no one to remember.

This is some real “every sperm is sacred” shit.