A violent mob of white people descended on a community of black people in Tulsa, Oklahoma with the conscious intent of destroying them. The Tulsa police organized and aided them. The Tulsa Race Massacre had begun. 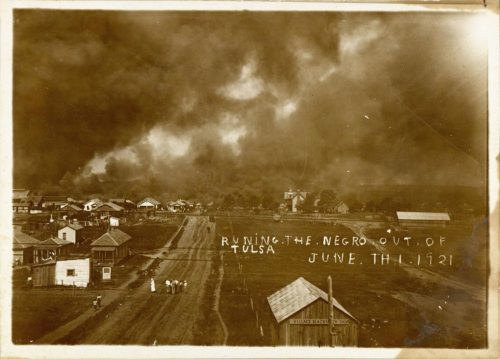 Fearing that the lynching of Dick Rowland was imminent, a small, armed contingent of Black men, some of whom had served in World War I, came to the courthouse around 9:00 p.m. to offer the authorities their assistance. They left upon being promised that no harm would come to Rowland, but their brief presence further enraged the growing white mob. By 9:30 there were almost two thousand angry whites milling around outside the courthouse, many with guns, and the county sheriff was preparing his deputies to make a stand should the building be attacked. When a second, larger group of Black men arrived in hopes of helping to protect Rowland, they were again told that their services were not needed. This time, however, a white bystander, perhaps angered by the sight of Black men carrying weapons, attempted to take the gun of a Black veteran who was walking away with the rest of the group. As the men struggled, one of their guns went off. In the chaos of the moment, armed whites began shooting indiscriminately at the retreating Black men, some of whom shot back. In that first quick interchange of gunfire, twenty people were killed or wounded. The Black men hastily left the scene, but they were followed by armed whites, who engaged them in further gunfire on Fourth Street and then on Cincinnati Avenue, resulting in additional casualties. That initial pursuit ended when what was left of the group of Black men made it across the tracks of the Saint Louis–San Francisco Railway (popularly known as the Frisco Railroad), the demarcation line between white Tulsa and Black Tulsa.

Believing that the armed Blacks had instigated the firefight, Tulsa authorities joined forces with the enraged white civilians who had been at the courthouse, and together they set out to put down the “negro uprising”. Tulsa police haphazardly appointed between 250 and 500 white men (and even white youth) as “special deputies”, granting them the authority to arrest as well as shoot and kill Black people whom they viewed as in rebellion against white Tulsans. According to one eyewitness and participant in the massacre, the deputized whites were specifically told to “get a gun and get a nigger”. When a group of Black men gathered north of the Frisco tracks, forming a defensive wall to prevent the swelling white mob from crossing en masse into Black Tulsa, they were violently confronted around midnight by the Tulsa police, the local unit of the Oklahoma National Guard, and the hastily assembled contingent of armed “deputies”. Whites who had already made it into the Black community were now shooting randomly through windows and setting homes and businesses on fire. In at least a few cases, Blacks were deliberately murdered, including an elderly couple who were gunned down inside their home. The most destructive and perhaps deadliest race massacre in American history had begun, and it would continue unabated for approximately twelve hours. By noon on June 1, by one contemporaneous estimate, as many as three hundred people had been killed, and Greenwood’s business district, as well as more than one thousand Black residences, lay in ashes.

The vast majority of contemporaneous press coverage, official reports, and subsequent histories refer to the events of May 31 and June 1, 1921, as the “Tulsa Race Riot”. To be sure, since the middle of the nineteenth century, “race riot” has been the generic term used to describe outbreaks of violence between different racial or ethnic groups. In the past five years, however, there has been a growing consensus within the news media and the general public around “race massacre” as the more appropriate descriptor, which is part of a larger effort to tell the story of what occurred from the vantage point of the Black victims and survivors. The Tulsa Race Massacre Centennial Commission (2015–present), headed by Oklahoma state senator Kevin Matthews, is to be applauded for its leadership in initiating the conversation about how the events can be most accurately framed. I believe the shift in terminology from “race riot” to “race massacre” is a necessary and timely corrective.

First and foremost, the word “massacre” better captures what actually occurred. Had the Black community been able to keep the white invaders from entering the Greenwood District, or had the violence subsided that same night, the term “riot” might be more apt. The following morning, however, white civilians and authorities banded together to launch a systematic assault on Black people and property, and that coordinated incursion places the subsequent events squarely in the realm of a massacre.

According to testimony from both Black and white eyewitnesses, by daybreak on June 1, several thousand armed whites had amassed in various locations along the southern border of the Greenwood District. At approximately 5:00 a.m., a whistle or siren was sounded as a signal for the invasion to begin. As the white mob stormed into Greenwood, a machine gun that had been set up atop a grain elevator sprayed bullets into Black homes, businesses, and churches along Greenwood Avenue. Airplanes flew overhead, from which whites reportedly fired pistols and shotguns (and even dropped rudimentary explosives) down at Blacks fleeing the violence.

Once in Greenwood, the invading whites, civilians as well as authorities, reportedly shot and killed any Black person who was found to be armed or who did not immediately surrender, including some who were simply attempting to flee from the violence. Faced with this overwhelming show of force, Black Tulsans reluctantly emerged from their homes, surrendered whatever weapons they possessed, and were taken into custody. They were transported to temporary detention centers — at Convention Hall until it was full, and then to McNulty Park and the fairgrounds — where they were held until they were able to get a white person to vouch for them. There is no evidence that any of the whites involved in the mob violence were detained by authorities, let alone arrested.

They made postcards of the event, photographing dead bodies in the street and the smoking wreckage of the community. This event, and the willful blindness of the white people, the textbooks, and the law that followed it, are part of our shameful history. You can’t teach the history of the United States without acknowledging the disgraceful racism that befouls it from the very beginning.