If only this weren’t a common response. 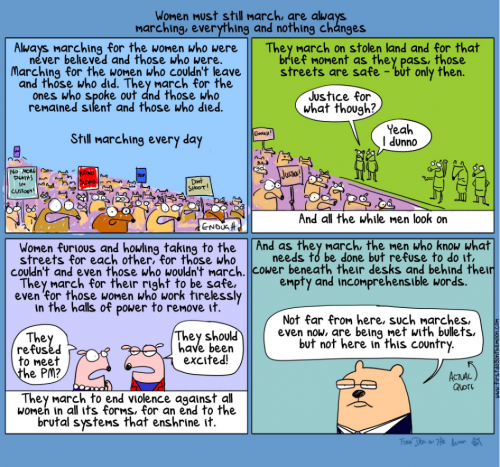 It is an actual quote from Australian Prime Minister Scott Morrison.

Not far from here, such marches, even now are being met with bullets, but not here in this country, Mr Morrison told Parliament.

This is a familiar defense of the status quo. You want equality? With ME??!? You should be grateful that we didn’t shoot you. It is the ubiquitous old white man defense of their privilege, which allows them to perpetuate the inequities that exist now, because they can always find someplace else that is much worse. The existence of a sliding scale of misery is used to justify itself — that protesters are shot in Myanmar allows us to smugly pat ourselves on the back when people in our country protest injustice because This is a triumph of democracy when we see these things take place, and not do anything. Then why are they protesting?

Stop whining, will you. Yes, yes, I know you had your genitals mutilated with a razor blade, and . . . yawn . . . don’t tell me yet again, I know you aren’t allowed to drive a car, and you can’t leave the house without a male relative, and your husband is allowed to beat you, and you’ll be stoned to death if you commit adultery. But stop whining, will you. Think of the suffering your poor American sisters have to put up with.

And you, Muslima, think you have misogyny to complain about! For goodness sake grow up, or at least grow a thicker skin.