The right-wing freakout over Dr Seuss is amusing. The get everything wrong, but there is such wild-eyed outrage over his publisher not publishing books containing offensive illustrations. 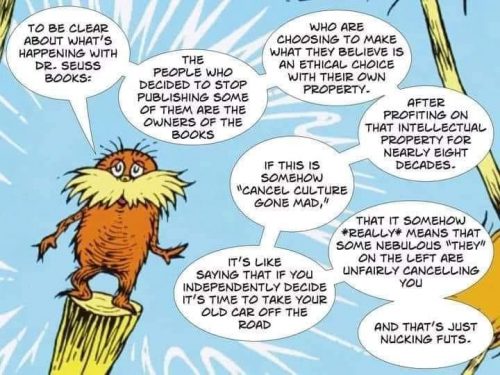 Yes. That’s how it works. The people who own his works are exercising their right to not publish them. It’s not censorship, and it’s not driven by some imaginary leftist cancel culture.

I’ve been reading Seuss for most of my life, we read his books to our kids, and there are some that are popular with my granddaughter right now. They’re great books! No one is taking the Cat in the Hat out behind the chemical sheds. But there are definite examples of crude stereotyping of Asian and black people in some of them, and they taint the good.

I knew that Theodore Geisel had worked as a propagandist during WWII, as did some of the great cartoonists associated with the Warner Brothers label. If he were still alive, he’d probably be relieved to see that his racist works were being removed from the shelves of children’s libraries. We shouldn’t forget that Geisel approved of the internment camps for people of Japanese ancestry, or that he used crude steretoypes of African people, but it’s for the best that that stuff isn’t used in humorous primers intended to help children learn to read.

My grandfather fought in the Pacific during WWII, and came back filled with a lot of hatred and bigotry (which he did not outgrow, unlike Theodore Geisel). While I would like my grandkids to know something about their great grandparents at some point, I’m not going to start by sitting down and teaching them all the slurs Grandpa used for Asian people. That would be taking the wrong message from the experience.