Poking around in the weeds as we do every summer, looking for spiders, one thing we turn up a lot are frogs. Big frogs. They like to nestle in some nice shady leaves during the day, and we occasionally part some leafy foliage to find a frog looking back at us, as if wondering how dare we intrude on his home. I’ve often thought they need a good predator to teach them a lesson. 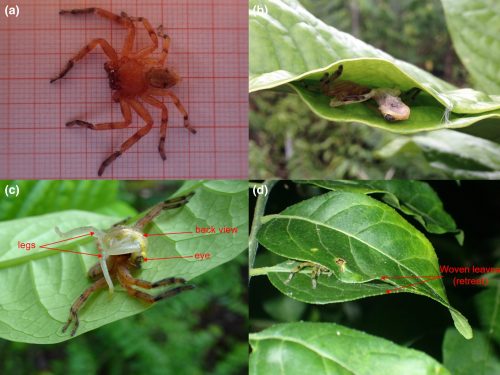 These cunning ambushers from Madagascar use silk to stitch together a few leaves, making a nice shady refuge that might appeal to a frog looking for respite from the daytime heat. The frog snuggles in, not noticing the large-fanged venomous arthropod lurking in the back, and then snicker-snack, he’s a juicy piece of meat being sucked dry by Damastes.

I don’t know about you, but if I poked my face into a local bush and saw a big glorious spider instead of a fat frog, I’d be delighted. It’s not likely, though, since our harsh winters tend to kill off most of the spiders, giving them only a short growing and breeding season.

Maybe this would be a bright prospect from global warming? Do you think Republicans would be even more resistant to the idea of good legislation if they thought climate change would create a better environment for big hairy blood-suckers? They do have some things in common.

You can always call me with spider stories » « Seattle will allow you to rot!