The insurrectionists are back-pedaling frantically. Charlie Kirk is claim now that it was “stupid” and “unwise” to invade the capitol, but not criminal. They didn’t mean it! Another benefit of the collapse of Parler (and it’s sloppy coding) is that their plans in the runup have been exposed, and while I can agree that they are “stupid”, the intent is transparent. A sampling: 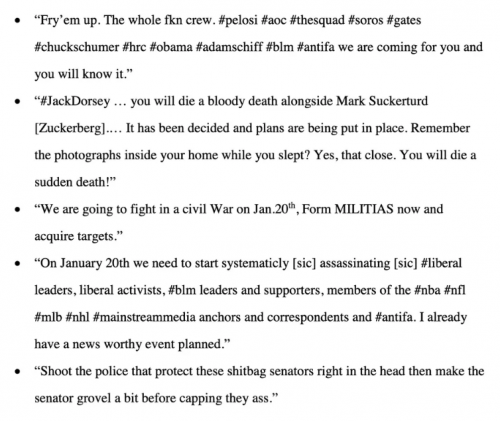 Is anyone surprised that Amazon and Apple removed all support for Parler?

What I find ominous, though, is that only a few in that sample mention the 6th of January — most were focused on the 20th, the day of the inauguration. Next week. Will the Washington DC police finally take these threats seriously? Will the bad guys try to sneak in by mingling with the inauguration crowds? Are some of the planning acts of terrorism against random people?

Maybe they just want to make sure that the inauguration is even smaller than Trump’s. Mission accomplished, I suspect: I wouldn’t recommend attending.

I sure won’t. That’s the day after my classes begin!