The spiders had to line up for their pictures today. I had a fixed routine, like a real portrait photographer.

It was a fun process, but I’m a little unhappy with the quality of the images — they’re not coming out very crisp. It may require some tweaking to compensate for the microscope adapter. Everything looks great through the eyepieces, but kind of squidgy in the camera output of the trinoc.

I’ll put one example below the fold. 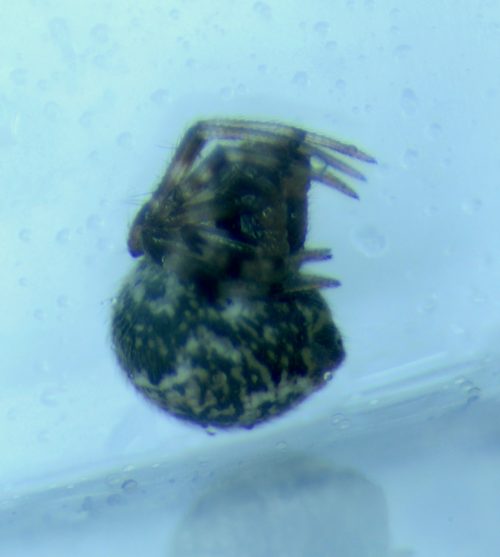 You can see what I’m interested in — the pigment patterns in the abdomen. And now I’ve got a bunch of sibling individuals so I can start thinking about possible heritable patterns.

You can see the blurry outlines of water droplets all over the picture. Obviously, this was after I sprayed them with an atomizer. Each of those drops are clinging to a strand of silk so you can also get an idea of the extent of the cobweb. It’s everywhere!

Who wants to chat about salamanders and limbs and variation? » « Beware of Cenobites offering Puzzle Cubes