They’re still digging things out of Pompeii? Cool. Here’s an open food stand that’s beautifully painted and would tempt me even now: 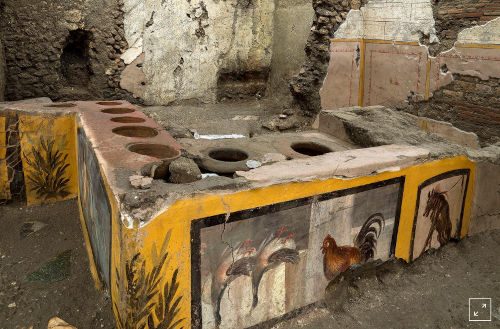 Known as a termopolium, Latin for hot drinks counter, the shop was discovered in the archaeological park’s Regio V site, which is not yet open the public, and unveiled on Saturday.

Traces of nearly 2,000-year-old food were found in some of the deep terra cotta jars containing hot food which the shop keeper lowered into a counter with circular holes.

The front of the counter was decorated with brightly coloured frescoes, some depicting animals that were part of the ingredients in the food sold, such as a chicken and two ducks hanging upside down.

Analysis revealed traces of pork, fish, snails and beef remaining in the cylindrical containers. What I really need to know is what spices were used and how they were prepared, and I’m not handing over a single as until I smell the food being cooked.

It’s mortality assessment day! » « Don’t try to tell me it’s not a cult