Ross Douthat does it again. He’s spewed out a pointless screed in which he tediously tells us that science isn’t pure, that somehow you have to engage with social values and not just simply calculable formulas of utility, and I can agree with all that. I think I’ve been saying it myself for years, that what we do with science and how we implement is shaped by culture, and there’s no denying it. But Douthat has an agenda lurking under the glurge, and being Douthat he can’t just come out and say what it is. So I read his whole essay, painful as it was, and emerged out the other side wondering what he’s advocating.

And to the extent that trust the science just means that Dr. Anthony Fauci is a better guide to epidemiological trends than someone the president liked on cable news, then it’s a sound and unobjectionable idea.

But for many crucial decisions of the last year, that unobjectionable version of trust the science didn’t get you very far. And when it had more sweeping implications, what the slogan implied was often much more dubious: a deference to the science bureaucracy during a crisis when bureaucratic norms needed to give way; an attempt by para-scientific enterprises to trade on (or trade away) science’s credibility for the sake of political agendas; and an abdication by elected officials of responsibility for decisions that are fundamentally political in nature.

We’re only in the second or third paragraph, and the murk is already growing. What “science bureaucracy” are you objecting to, Ross? There is one, of course — in a society dependent on science, but where the public is generally ignorant and misinformed, it’s inevitable that institutions have to form to provide good information to politicians. I’d love to see greater democratization of science, but the existence of a “science bureaucracy” is a product of the American environment.

But what “political agenda” are you complaining about? What credibility is being traded away? And of course elected officials, politicians, are making political decisions. Isn’t that obvious?

Then, finally, we get the issue that’s got him wound up: it’s the question of who gets the coronavirus first.

But the further you get from the laboratory work, the more complicated and less clearly scientific the key issues become. The timeline on which vaccines have become available, for instance, reflects an attempt to balance the rules of bureaucratic science, their priority on safety and certainty of knowledge, with the urgency of trying something to halt a disease that’s killing thousands of Americans every day. Many scientific factors weigh in that balance, but so do all kinds of extra-scientific variables: moral assumptions about what kinds of vaccine testing we should pursue (one reason we didn’t get the “challenge trials” that might have delivered a vaccine much earlier); legal assumptions about who should be allowed to experiment with unproven treatments; political assumptions about how much bureaucratic hoop-jumping it takes to persuade Americans that a vaccine is safe.

Yes? We know. There are all kinds of regulatory hoops to jump through before you toss a new medication out to the public. The ethics of science are complicated and interact messily with with social values. We didn’t do those “challenge trials” because we have a long established policy of testing with randomized controlled trials before general release, and challenge trials require intentionally exposing subjects to the virus and your relatively untested vaccine simultaneously. Yeah, it’s a political and ethical decision. What do you propose to do instead? I’m still at a loss about what Douthat is complaining about.

Then it turns out that what’s really chafing poor Ross is that the liberals had a hand in making decisions.

Then there’s the now-pressing question of who actually gets the vaccine first, which has been taken up at the Centers for Disease Control and Prevention in a way that throws the limits of science-trusting into even sharper relief. Last month their Advisory Committee on Immunization Practices produced a working document that’s a masterpiece of para-scientific effort, in which questions that are legitimately medical and scientific (who will the vaccine help the most), questions that are more logistical and sociological (which pattern of distribution will be easier to put in place) and moral questions about who deserves a vaccine are all jumbled up, assessed with a form of pseudo-rigor that resembles someone bluffing the way through a McKinsey job interview and then used to justify the conclusion that we should vaccinate essential workers before seniors … because seniors are more likely to be privileged and white.

That “working document”? It’s a set of powerpoint slides that explains how the CDC made decisions about how to prioritize who gets vaccinated. It explicitly points out all the things Douthat has said: that there are issues of science, ethics, and implementation that need to be balanced, and it goes through their process in an abbreviated, powerpointy way. It’s not the clearest way to explain their reasoning, but the whole point of the document is to point out that there are all these non-scientific concerns that must be considered. Again, what is he complaining about? Isn’t that what he was talking about in the first half of the essay?

But then we get to the real issue for Douthat: “the conclusion that we should vaccinate essential workers before seniors … because seniors are more likely to be privileged and white.” It’s all identity politics! They’re discriminating against white people!

On one page it lists three ethical principles of concern: “maximize benefits and minimize harms,” “promote justice,” and “mitigate health inequities.” Then, in a table, it assesses each of those principles for essential workers, high-risk adults, and the elderly. And then under “health inequities” and the elderly, it says “Racial and ethnic minority groups under-represented among adults >65”. That’s it. It states a simple fact about demographics of the disease. It was clearly not the major reason for the priorities that were set. It’s just one factor that ought to be considered.

But Douthat (and Matthew Yglesias, but fuck Yglesias) basically wants to claim that this is evidence that it’s the liberals are being racist.

As Matthew Yglesias noted, this (provisional, it should be stressed) recommendation is a remarkable example of how a certain kind of progressive moral thinking ignores the actual needs of racial minorities. Because if you vaccinate working-age people before you vaccinate older people, you will actually end up not vaccinating the most vulnerable minority population, African-American seniors — so more minorities might die for the sake of a racial balance in overall vaccination rates.

No, it’s clear from the table that a major factor in the final decision was the multiplier effect — that benefits to health care workers spread rapidly to assist all the other groups. Sure, we could decide to “mitigate health inequities” by insisting that old black people are first in line, but who is going to give them their vaccine? Who’s going to make sure they follow the protocol? That’s why the CDC puts health care workers in front, because maintaining that group helps all groups. And it’s all the fault of those liberals!

But for liberals, especially blue-state politicians and officials, the failure has more often involved invoking capital-S Science to evade their own responsibilities: pretending that a certain kind of scientific knowledge, ideally backed by impeccable credentials, can substitute for prudential and moral judgments that we are all qualified to argue over, and that our elected leaders, not our scientists, have the final responsibility to make.

This conclusion does not make any sense. Douthat starts this essay by explaining that there isn’t a simple scientific answer for social problems; then he cites a CDC document that shows they are well aware of this problem, and that they are weighing ethical and logistical concerns in addition to the scientific matters; and then he says damn those liberals who want to run roughshod over morality with capital-S Science!

My head hurts. He just wrote a lot of words that didn’t make a coherent point, and he doesn’t say what action is needed to correct for the problem, whatever it is. It’s a lot of finger-wagging at scientists and liberals, with vague intimations that they’re doing a racism against white people, and the implication that their rules for prioritizing the order of vaccinations aren’t good. I don’t get it…wait. There is an explanation for that essay. He’s a conservative, trying to muddy the waters about who should get vaccinated, and claiming the decision-making process is tainted with liberal bias. Why would he do that? 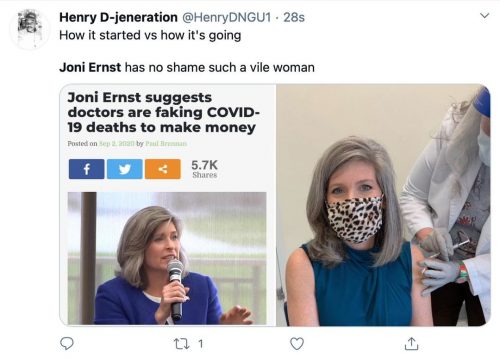 There sure has been a lot of obvious line-jumping by conservative science-denialists lately. Somebody is thinking it would be useful to sow doubt about how the line is ordered.

In that entire CDC working document, they failed to consider the plight of white dumbass pig castrators. LIBERAL BIAS! If they weren’t so infatuated with capital-S Science they would have been able to justify treating these parasites first.

Moscow Mitch is lying again » « Dang, I think I know that girl