I’m seeing two kinds of negative reactions to Elliot Page’s revelation. One is outright denial, verging on rage; the other is dull, stupid incomprehension. Neither are particularly attractive, or complimentary to the character of those making them.

The loudest example of the first is this editorial by Brendan O’Neill, in which he deadnames him and goes on and on, stupidly upset that a woman cannot just click her fingers and become a ‘he’. It’s about what I would expect from O’Neill, who is one of those peculiarly British reactionaries, a shrieking Trotskyite who always favors conservative authoritarianism. I really don’t get Brendan O’Neill, he’s such a strange creature. But here’s what he says about Elliot Page:

So that’s it, is it? Ellen Page is no more? She’s been disappeared? She’s been shoved down the memory hole, left to stalk that netherworld of people whose names must never be uttered out loud, like Bruce Jenner, Frank Maloney, Voldemort? Ellen Page, the actress most famous for starring in irritant quirkhouse movie Juno, has now declared that she is Elliot Page and that she’s a he. And, boom, just like that, Ellen’s gone. She’s being erased from film history. People are getting into trouble even for saying the word ‘Ellen’. ‘Who?’, woke identitarians ask, as if they’ve all gone mad.

It goes on and on like that, but the gist of it seems to be that he acts as if “Ellen Page”, the female, has been dragged out and shot, to be replaced by “Elliot Page”, the male, and that we’ve betrayed her by accepting their evolution. It’s an odd view that isn’t believed by anyone. There was a person, a human being, who was assigned female at birth, and who lived and grew and realized that the identity forced on them by the conventions of culture was not the identity they held inside. The person isn’t gone or erased, they’re still here — they just aren’t the person you thought they were, and they definitely don’t fit into the one of the binary cartoons you wanted them to conform to…but then, nobody does. Get over it.

The second type of anti-trans sentiment I’m seeing is the chickenshit sarcastic ‘skeptic’ who is Just Asking Questions, because they want to be able to run away fast if called out on their bigotry. Who else could better represent that view than Michael Shermer? 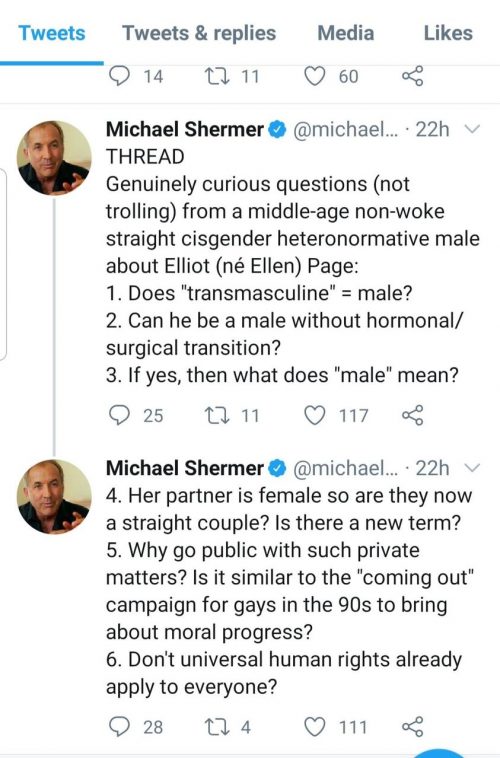 Oh, he’s serious (not trolling). Do I need to point out that he’s published many books, which he likes to claim are the product of “research”, and that he should have the tools at his fingertips to find all kinds of sources that could explain to him in great detail how to answer those questions? Does he usually “research” his books by asking leading questions on Twitter of his followers, who, he must know by now, tend to have a bit of a bias against the progressive views that he’d need to listen to? Shermer is definitely trolling. He’s just playing the dumbass to build some plausible deniability, and to pretend to be more open-minded than he actually is.

Also, he left off the question he really wants to ask. If Michael Shermer thinks Elliot Page is attractive and wants to assault him, would that make Shermer gay? Go away, Shermer, you’re just an awful person.

So, this is what it’s like to live in a gerontocracy » « I tried imagining this, and then I throwed up