It’s creepy. Even the expressions are the same. If one of them committed a crime, I wouldn’t be able to pick him out of a lineup. 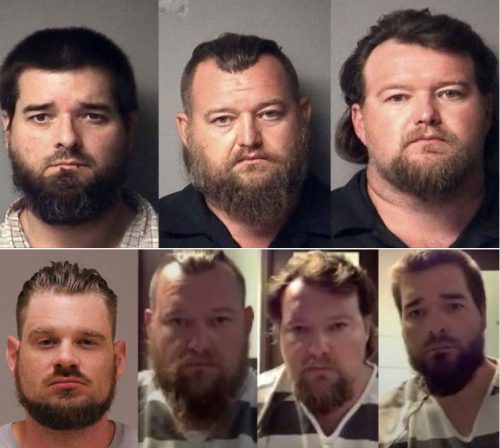 Fortunately, it’s easy this time, because they all committed a crime. These are some of the Michigan yahoos who plotted to kidnap the governor and start a civil war.

The FBI revealed Thursday that it thwarted a plot to kidnap Michigan Gov. Gretchen Whitmer, unsealing charges against six people who it said contemplated a violent overthrow of the government as state authorities charged seven more who they said wanted to attack police and ignite a civil war.

The plotters, according to an FBI affidavit, seemed to be motivated by their belief that state governments, including Michigan’s, were violating the Constitution. One of those involved complained in June that Whitmer (D) was controlling the opening of gyms — an apparent reference to coronavirus shutdown restrictions. But unbeknown to them, the FBI had confidential informants recording many of their discussions, according to the affidavit.

President Trump has been publicly critical of Michigan’s leaders because of the state-imposed measures to stem the spread of the coronavirus, tweeting in April, “LIBERATE MICHIGAN.”

I don’t think they’re antifa supporters. These are members of a right-wing militia, and our president hasn’t yet figured out who is really fomenting the violence. Lock them up, and hey, let’s get a president who can figure out who the real problems are.

Meanwhile, am I going to have to shave? No, wait, then I’d look like a neo-Nazi. Maybe it’s not the beards, or the sullen expressions…is it the skin color? Because I can’t fix that.

Dang it, woke up too early » « Should I regret missing the VP debate?