There’s a protest in New Mexico. Some of the protesters try to tear down a statue to a conquistador. The shooting starts. Who’s doing it? Why, the gentlemen in military costumes, carrying military firearms, who are then treated respectfully by the police. 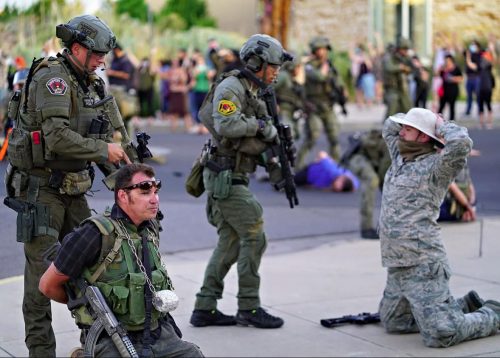 The right-wing militia and the police are rather hard to tell apart in that picture. It’s also amazing how when it’s an armed mob of white people with obvious violent intent, they get treated so gently, and how the murder militia responds so calmly and meekly. They know they’re not going to be spontaneously throttled or battered or executed. They aren’t worried at all.

New Mexico civil guard members and one other man being arrested. All weapons being taken from them. Still no ambulance here. Police are here. Unclear who fired shots pic.twitter.com/HBe5SVjs2r

This is the future, as illustrated in this excellent comic. 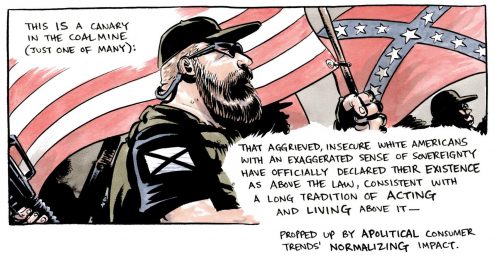 I’m not afraid of black people, but man, these armed white terrorists are the big worry.

The guy they shot is in critical condition but recovering, by the way. The whole gang of marauders need to be tried for attempted murder.

The terrorist has been identified and arrested. His name is Stephen Ray Baca. He’s scum.

“The heavily armed individuals who flaunted themselves at the protest, calling themselves a ‘civil guard,’ were there for one reason: To menace protesters, to present an unsanctioned show of unregulated force,” New Mexico Gov. Michelle Lujan Grisham (D) said in a statement. “To menace the people of New Mexico with weaponry — with an implicit threat of violence — is on its face unacceptable; that violence did indeed occur is unspeakable.”

Albuquerque Mayor Tim Keller (D) said the statue would now be speedily removed as an “urgent matter of public safety” until authorities determine a next step.

Fine. So when a bunch of soldier-wannabes in costume show up waving guns at a protest, tell the police to speedily remove them, too.

Brainwashed! » « What did Satan do that was so bad?