All of you prophets out there — who among you predicted that in the final (we hope) year of Trump’s presidency, the country would be crippled by a pandemic, the police state would run wild, our cities would be on fire, protesters would overrun the White House lawn, and Trump would be hiding in a bunker? Anyone?

Over four centuries of slavery, colonialism, and exploitation are finally coming home to roost and we’re going through a well-earned paroxysm of pain. The only questions are how much worse is it going to get, and will the nation survive it? We know already that it’s going to get much worse if Trump is left in charge.

As cities burned night after night and images of violence dominated television coverage, Trump’s advisers discussed the prospect of an Oval Office address in an attempt to ease tensions. The notion was quickly scrapped for lack of policy proposals and the president’s own seeming disinterest in delivering a message of unity.

Trump did not appear in public on Sunday. Instead, a White House official who was not authorized to discuss the plans ahead of time said Trump was expected in the coming days to draw distinctions between the legitimate anger of peaceful protesters and the unacceptable actions of violent agitators.

On Sunday, Trump retweeted a message from a conservative commentator encouraging authorities to respond with greater force.

This is precisely what we don’t need. The American police have effectively delegitimized themselves with their brute force tactics and their alignment with white supremacy, and American justice has compromised itself with decades of oppressive laws that mean that 2½ million citizens are now imprisoned, mostly for drug-related crimes, and the law is unequally applied to black and white people. Money has poured into law enforcement to the point where they’re buying army surplus armored cars.

What we need to do is defund the police.

If Congressional lawmakers are serious about reining in abusive policing, there are things they can do at the federal level. They can start by eliminating the Community Oriented Police Services (COPS) office. Created by the 1994 Crime Bill, it has been the central conduit for funds to hire tens of thousands of new police and equip them with a range of surveillance technology and militarized equipment.

One of the projects they currently administer is Operation Relentless Pursuit, the Trump administration’s signature crime fighting initiative, that is set to flood seven major cities with scores of federal agents in partnership with local police to go after his favorite bugaboos of gangs and drug cartels. Congress approved $61 million dollars to pay for it, and that money should be taken out of any future appropriations. They can also take more steps to undo the damage done by the 1994 Crime Bill, like defunding school policing in favor of providing more counselors and restorative justice programs; investing in harm reduction strategies, like safe injection facilities and needle exchanges as well as high quality medically based drug treatment on demand; and rethinking the use of the criminal justice system to manage the epidemic of domestic violence.

It is time for the federal government, major foundations, and local governments to stop trying to manage problems of poverty and racial discrimination by wasting millions of dollars on pointless and ineffective procedural reforms that merely provide cover for the expanded use of policing. It’s time for everyone to quit thinking that jailing one more killer cop will do anything to change the nature of American policing. We must move instead, to significantly defund the police and redirect the resources into community-based initiatives that can produce real safety and security without the violence and racism inherent in the criminal justice system.

Take away their toys. Stop rewarding cowboy cops. End the us-vs-them attitude, don’t attack communities with paramilitary thugs, but do engage with them as fellow citizens. Unfortunately, if you turn on your TV or go to the movies, you’ll discover that the renegade macho cop is valorized, that car chases and crashes are routine, and that every conflict is resolved with a gun. Cops are somehow above the law, and their job involves getting the bad guy even if it means turning a neighborhood into a burning wasteland.

Does this look like “protect and serve” to you? 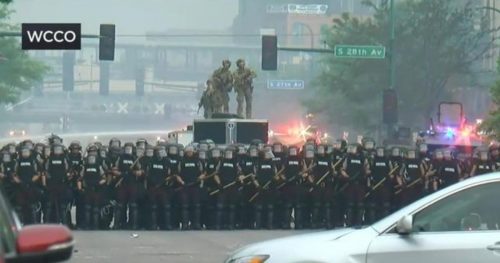 It’s not like I expect change to happen. Trump is fulminating in his bunker, raving about sending the army to take care of his enemies, and the Democrats are little better — note that the 1994 crime bill, mentioned above, was written by Joe Biden and signed into law by Bill Clinton. The instinctive response of the establishment politician is alway to crack down hard on any threat to their power. We’re going to have to tear it all down first.

We should start at the top and work our way down.

You want to see the problem?

The LA city budget is due tomorrow (6/1). $3 billion — a full 54% — of the budget is going to LAPD. We've seen the cops the past two days. They have enough money. Call and email council members and implore they have an emergency meeting to redistribute.

The police are seeing this as an excuse to demand more money to do their job poorly.

A little optimism, plus a little Ben Shapiro puncturing » « Here come the grooms