The other daaaay, we’d gone walking around the Pomme de Terre river, and just off the bike trail there is an old gazebo. It’s weathered, lichen-covered, and a bit creaky, but it’s also covered with spectacular orb webs, so we were curious to find out who was living there. 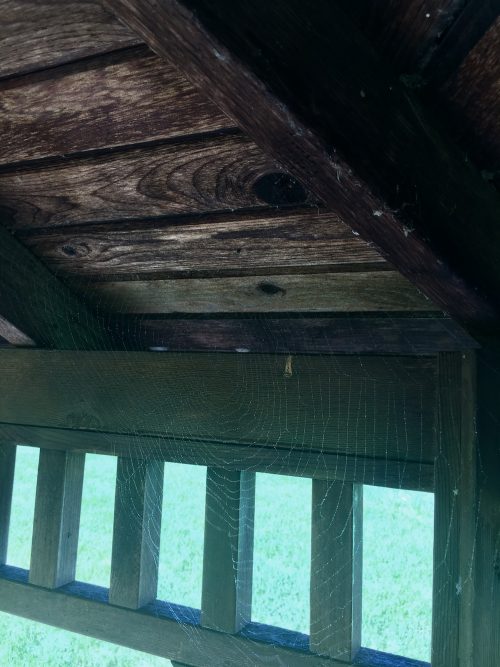 We poked around, and a couple of spiders scurried out, but I was baffled…the ones we caught didn’t look like orb weavers, they seemed to be Theridion, or social cobweb spiders. I guess they’re just lurking, taking advantage of any small prey caught in another spider’s web. The actual weavers of those webs couldn’t be found anywhere. I suspect the reason for that is that smack in the middle of the gazebo is a swallow’s nest, so any reasonably large spider is going to hide during the day an only emerge at night.

We’re tempted to revisit at night, except that another feature of the gazebo is all the hearts and INITIALS+INITIALS carved into the wood. We might interrupt more mammalian activity.

OK, so we looked around elsewhere. The orb weavers are starting to appear everywhere, but most are very tiny, building the cutest little orbs that might be a couple of centimeters across in the greenery. 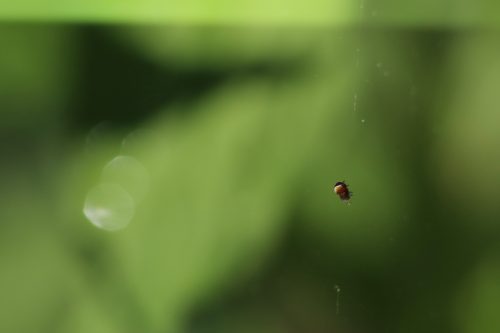 Very tiny. It’s also a bit breezy, so they’re practically vibrating in their webs. My approach was to use a fast shutter speed and multi-shot, then hope that it least one of the images was in focus. Like this.

We also spotted lots of itty-bitty ground spiders, like one scurrying across the hand of Professional Spider Hand Model, Mary Gjerness Myers.

My Professional Spider Hand Model also has sharp eyes, and she noticed a few more of those Social Cobweb Spiders hanging out on a rusty signpost.

Also quite small. When we came home, Professional Spider Hand Model and Laser Eyed Spider Scanner took a while to cool down and turn off, so she also found that our garden was growing lots more orb weavers and tetragnathids.

Check out your environment! Park benches, gardens, random surfaces around your house are accumulating spiders at a rapid rate!

As usual, there are more photos that can be seen on my Patreon page and Instagram. I’m hoping to turn Mary into an Instagram Influencer with these closeup photos of her skin, we could use the money.