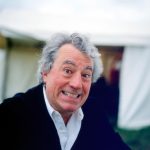 I’m just now catching up with the news. Terry Jones has died? Now I feel like I’m on a deathwatch for Monty Python, because the world lost Graham Chapman 30 years ago, which is kind of unbelievable in itself.

Cleese, Idle, and Palin better hang in there, because the troupe is now at half-strength (Terry Gilliam was the third casualty, because he’s dead to me).

Goodbye, Facebook friends. Up yours, Facebook. » « This means my grandchildren are old enough to start a band!