I have to love speculative science — it’s in my contract as a popularizer — but I also like solid, well-established science and the cautious determination of incremental advances in our knowledge. Looking at both ends of the continuum and everything in between sometimes exposes some very poorly thought-out leaps in people’s assumptions, though, and then it’s also in my contract that I have to be grumpy and point out the flaws. This morning I’m feeling my grumpy side.

Let’s start at the beginning, with some nice work in tardigrades. Tardigrades are cool, obviously, and have a reputation as being tough customers who can survive all kinds of stresses that the environment throws at them. Freeze them, dry them out, throw them in outer space, zap them with radiation, and they can cope…at least, they cope far better than we do. Part of this ability is that they’re small and relatively simple, and being tiny and compact in itself is an advantage, but in addition, their cells have a sophisticated battery of proteins evolved specifically to enable them to handle stressful cellular situations without giving up and dying. It’s a sensible approach to take apart the tardigrade genome and puzzle out the genetic strategies they use to optimize cellular protection from stress, as Kunieda and others have done.

They scanned through the tardigrade genome looking for differences with other, less resilient animals, and found that sometimes that change involved deleting pathways that triggered stress responses. For instance, the genes in purple below are present in us, but missing in tardigrades. 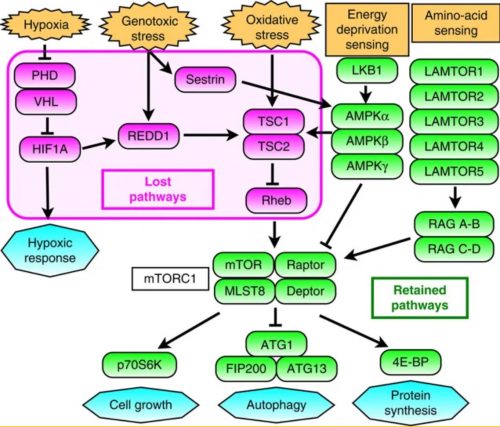 This absence makes sense. It is desirable for our cells to kick the bucket when hit hard by environmental stresses; one kind of instance where this could happen is in cancer, where cells are in a poor physiological state, and it’s better for them to die and be replaced by healthy cells. Tardigrades, on the other hand, are already in possession of only a few tens of thousands of cells, and may be trying to cope with a systemic stress that affects every cell in their body, so this approach is not such a good one for them.

They also identified unique genes found only in tardigrades, such as this one, called Dsup, short for damage suppressor. This gene makes a protein that is associated with the DNA, and which has a high affinity for DNA; it’s also expressed in tardigrades with a high resistance to radiation damage. So, the immediate question is…is this protein responsible for radiation protection, and how does it work?

Since tardigrade cells have a lot of mechanisms for dealing with stress, and they want to just look at this one protein, the authors extracted the tardigrade gene and transfected it into a human cell line in order to determine its effects on a cell lacking all the other stuff a tardigrade cell provides.

They chose to use HEK293 cells (HEK is short for human embryonic kidney). A word of caution: these are cancer cells, not normal human cells. They are a popular cell culture choice because they proliferate readily in a dish, and are easily transfected with foreign DNA. They are hypotriploid — having nearly 3 times the number of chromosomes of a normal human cell — and contain adenovirus DNA that has turned them into madly dividing cancer cells. That doesn’t matter for the Kunieda study, though, since they just want to add a tardigrade protein to see what new properties it confers on the cells.

So they hit untreated HEK293 cells and HEK293 cells incorporating the tardigrade Dsup gene with X-rays, and found that the Dsup gene protected the chromosomes — they saw 40% fewer single-strand DNA breaks. They also saw that Dsup reduced the number of double-strand DNA breaks in these cells. They also did good controls, for instance knocking down Dsup expression in transfected cells, and seeing the protection going away. 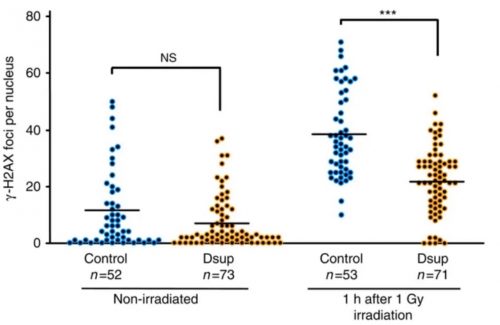 Distribution of the numbers of γ-H2AX foci per nucleus is shown. Each dot represents an individual nucleus of a HEK293 cell (Control) or a Dsup-expressing cell (Dsup) under non-irradiated and irradiated conditions. ***P<0.001; NS, not significant (Welch’s t-test).
[γ-H2AX looks for phosphorylated histones that form around double-stranded DNA breaks]

Good stuff. Good fundamental cell biology. There’s a lot of work here, but that’s what you have to do to tease out the role of various components of the stress response.

But then it gets weird as it percolates up into the popular press. This was a focused bit of research designed to assess how tardigrades defend themselves against radiation that used a human cell line as a tool, and suddenly, that’s the newsworthy part of the work. It starts with a Nature news article — they should know better, and it does start with a relevant discussion of the work, and then we get the section where it just has to be explained how it could affect humans.

This makes the new paper’s findings “highly interesting for medicine”, says Jönsson. It opens up the possibility of improving the stress resistance of human cells, which could one day benefit people undergoing radiation therapies.

Wait a moment. Just think it through. You, a doctor, have a patient with cancer that you’re going to treat with radiation therapy. Do you really want to make their cells more resistant to radiation? Sure, their healthy cells, but if you’ve got a way to transfect healthy cells with Dsup that does not similarly help cancer cells, you’ve probably got better molecular tools to target cancer cells selectively than radiation anyway.

Then, the line that’s going to spawn a lot of crap, from Kunieda himself.

Kunieda adds that these findings may one day protect workers from radiation in nuclear facilities or possibly help us to grow crops in extreme environments, such as the ones found on Mars.

Oh jeez. This is where Live Science steps in and builds a fantasy of genetically modified humans colonizing Mars.

Will we one day combine tardigrade DNA with our cells to go to Mars?

Chris Mason, a geneticist and associate professor of physiology and biophysics at Weill Cornell University in New York, has investigated the genetic effects of spaceflight and how humans might overcome these challenges to expand our species farther into the solar system. One of the (strangest) ways that we might protect future astronauts on missions to places like Mars, Mason said, might involve the DNA of tardigrades, tiny micro-animals that can survive the most extreme conditions, even the vacuum of space!

This is what prompted me to dig into this line of research. I read this hypothetical, and my cortex immediately sneezed “Bullshit!” in an acute skeptical reaction, and I had to read further. It’s the combination of an imaginary Mars colony and an imaginary radical re-engineering of the human genome to produce customized genetic humans to labor under conditions of extreme environmental hostility that set me off. None of this is realistic. None of the evidence so far is at all adequate to justify this kind of speculation. There is only the glimmering of consideration for the ethical consequences of such experimentation, if it were even feasible. Is genetically modifying your offspring so they can more efficiently farm potatoes on Mars likely to be something they desire? Hey, though, it’s an opportunity to bamboozle a gullible audience with buzzwords!

One way that scientists could alter future astronauts is through epigenetic engineering, which essentially means that they would “turn on or off” the expression of specific genes, Mason explained.

I detest the casual abuse of the word “epigenetic”. I’m doing “epigenetic engineering” right now — my metabolism undergoes the usual seasonal shifts as we move into winter. You’re doing it too. Cells are constantly going to “turn on or off” the expression of specific genes as an expected consequence of basic biology. It sure sounds sciencey though, doesn’t it?

Alternatively, and even more strangely, these researchers are exploring how to combine the DNA of other species, namely tardigrades, with human cells to make them more resistant to the harmful effects of spaceflight, like radiation.

This wild concept was explored in a 2016 paper, and Mason and his team aim to build upon that research to see if, by using the DNA of ultra-resilient tardigrades, they could protect astronauts from the harmful effects of spaceflight.

This is where I get really irritated. See that phrase, “explored in a 2016 paper“? The “2016 paper” is the Nature news article I cited above. The only “exploring” of the concept is that one line from Kunieda, almost certainly prompted by a journalist prompting him to say something about the relevance of his research to humans, because they don’t understand basic biology.

Then there’s that bizarre claim about building upon tardigrade research to use tardigrade DNA to protect astronauts from radiation. It’s not a quote, so I expect the Live Science journalist just invented it to say some random something to justify the article, but I would just ask a simple question of whoever made it up.

What specifically is being experimented on to improve astronaut’s resistance to radiation?

I’m going to guess that the real answer would be nothing, at least not yet. Let’s keep on eye on those wacky basic biologists who are studying core processes in genetics and cell biology with work on weird organisms that aren’t humans at all, and hope that sometime in decades to come some methods will emerge that will be applicable to human medicine. But until then, nope, nobody is shooting up astronauts with magical tardigrade DNA.

Can spiders die of over-eating? Asking for a friend » « I guess we have to kill all the superstar scientists now, too