I woke up this morning to a strange sound from my kitchen — an angry churring, punctuated with little squeaks. My first thought was that a squirrel had gotten in, or perhaps a large bat, so I investigated. The sound was coming from my oven, an ancient GE electric model. It sounded like it was coming from inside the oven, so I cautiously opened it, prepared in case an angry rodent leapt out at me. Nothing. By now the noise had been going on so long and was so repetitive that I was suspecting it might be something mechanical, but I did have one final test.

Hey, I’m a scientist, baby. Gotta do the straightforward experiment, no matter how cruel.

(I would have turned it off if I heard screams from inside.)

Anyway, I got it hot, to a temperature no mammal could survive. As the temperature rose, the noise continued unchanged — no frantic scurryings, no rise in pitch, and most importantly, no screeching beast with eyes ablaze and fur smoking erupted from the works, hot for revenge. The oven just kept chittering at me.

Then, after reaching the appropriate temperature and sitting there for 5 minutes, it stopped. The beast within was satisfied. Maybe it was just cold? Or maybe it’s something mechanical. I’m looking at this antique timer built in to it, which doesn’t work. Maybe something ticked over inside it, and it decided to finally let me know the turkey from Thanksgiving, 1961 was done with its dying, febrile buzzer. 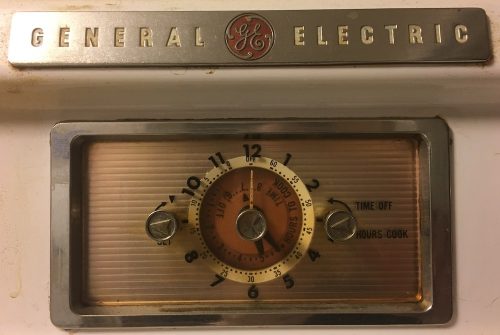 This is in many ways an unsatisfying outcome. It would probably be easier to get a demon exorcised from this hulking ugly beast that was installed in the 1950s than to get it repaired or replaced.