Jeanette Ng won the John W. Campbell Award for Best New Writer, and this is how her speech began:

John W. Campbell, for whom this award was named, was a fascist. Through his editorial control of Astounding Science Fiction, he is responsible for setting a tone of science fiction that still haunts the genre to this day. Sterile. Male. White. Exalting in the ambitions of imperialists and colonisers, settlers and industrialists. Yes, I am aware there are exceptions.

I think she was right — and seemly — to make her remarks. There’s plenty of evidence that Campbell’s views were odious and deplorable. For example, Heinlein apologists like to claim (probably correctly) that his terrible, racist, authoritarian, eugenics-inflected yellow peril novel Sixth Column was effectively a commission from Campbell (Heinlein based the novel on one of Campbell’s stories). This seems to have been par for the course for JWC, who liked to micro-manage his writers: Campbell also leaned hard on Tom Godwin to kill the girl in “Cold Equations” in order to turn his story into a parable about the foolishness of women and the role of men in guiding them to accept the cold, hard facts of life.

So when Ng held Campbell “responsible for setting a tone of science fiction that still haunts the genre to this day. Sterile. Male. White. Exalting in the ambitions of imperialists and colonisers, settlers and industrialists,” she was factually correct.

It reflects my experience as a reader of science fiction, too. I got hooked on this stuff as a boy in the 1960s, and initially read all the old classic authors — Asimov, Clarke, etc. — and was fascinated with all the robots and spaceships and hyper-advanced gadgetry that they wrote about, but failed to notice that they weren’t very good at writing about people. Then I stumbled onto New Wave writers, and Ursula Le Guin, and Joanna Russ, and all these other amazing writers who had escaped the orbit of the John W. Campbell school, and discovered that the JWC stable tended to be not-very-good writers, period, because that wasn’t what he cared about, which is a strange characteristic for an editor.

Also, when I finally discovered Heinlein in my mid-teens, I freakin’ hated his books. They were long-winded exercises in self-indulgent misogyny. I don’t think he needed JWC’s coaching to be an asshole, he was one naturally.

Here’s another take on Campbell.

Ng’s assessment of Campbell is undoubtedly informed by Campbell’s personal politics and beliefs and those who have written about him. Campbell argued that African-Americans were “barbarians” deserving of police brutality during the 1965 Watts Riots, as “the “brutal” actions of police consist of punishing criminal behavior.” His unpublished story All featured such racist elements that author Robert Heinlein, who built upon Campbell’s original story for his own work titled Sixth Column, had to “reslant” the story before publishing it. In the aftermath of the Kent State massacre, when speaking of the demonstrators murdered by the Ohio National Guard, Campbell stated that “I’m not interested in victims. I’m interested in heroes.” While difficult to presume where Campbell’s beliefs would place him in modern politics, it is apparent that Campbell would disagree with many of the beliefs held by modern America.

I’ve read enough Campbell to guess he’d be cheering for Trump — the pseudoscientific racist genetics, the anti-immigration stuff, the contempt for anyone who rocks the boat, he’d definitely be a Trumpkin.

Not just factually correct: also correct to be saying this now. Science fiction (like many other institutions) is having a reckoning with its past and its present. We’re trying to figure out what to do about the long reach that the terrible ideas of flawed people (mostly men) had on our fields. We’re trying to reconcile the legacies of flawed people [Harlan Ellison, fantastic writer, not such a nice person] whose good deeds and good art live alongside their cruel, damaging treatment of women. These men were not aberrations: they were following an example set from the very top and running through fandom, to the great detriment of many of the people who came to fandom for safety and sanctuary and community.

It’s not a coincidence that one of the first organized manifestation of white nationalism as a cultural phenomenon was within fandom, and while fandom came together to firmly repudiate its white nationalist wing, these assholes weren’t (all) entryists who showed up to stir trouble in someone else’s community. The call (to hijack the Hugo award) was coming from inside the house: these guys had been around forever, and we’d let them get away with it, in the name of “tolerance” even as these guys were chasing women, queer people, and racialized people out of the field.

Those same Nazis went on to join Gamergate, then take up on /r/The_Donald, and they were part of the vanguard of the movement that put a boorish, white supremacist grifter into the White House.

He’s talking about the Rabid Puppies, but I don’t think SF fandom was specifically responsible. We saw exactly the same phenomenon in skepticism/atheism with Elevatorgate and the slymepit. It’s everywhere. It’s like we entered the 21st century and scumbaggery blossomed everywhere. Arthur Clarke could predict geosynchronous satellites, sure, but he completely failed to anticipate the effect of selectively amplifying the voices of arrogant white male dudes, as SF, and science, and atheism, and everything had been doing for decades. What we’re seeing now is the effect of a patriarchal culture being shaken up, and the reactionaries fighting back.

This stuff matters. It’s deeper than any fandom, and it reflects a world-wide pattern of necessary change as the old order resists its slow, painful demise. Ng brings it right back to reality.

So I need say, I was born in Hong Kong. Right now, in the most cyberpunk in the city in the world, protesters struggle with the masked, anonymous stormtroopers of an autocratic Empire. They have literally just held her largest illegal gathering in their history. As we speak they are calling for a horological revolution in our time. They have held laser pointers to the skies and tried to to impossibly set alight the stars. I cannot help be proud of them, to cry for them, and to lament their pain.

Yes. The fascists and capitalists and corporate goons and colonizers have been running the world for a few centuries now, and it’s time to overthrow the old order. There will be great pain in the churn. 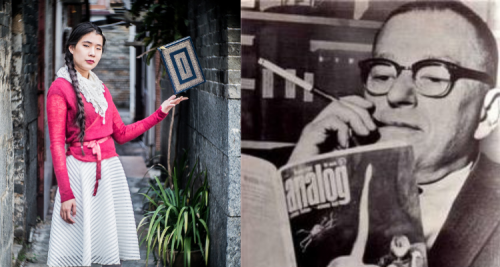 When did we become jaded? » « The National Embarrassment humiliates us all again