It was a long day in the lab — I had to catch up with washing glassware, a disgusting job since the main chore was all the fly bottles. There was a reward, however. I’ve been waiting for the colony to take off, and finally, they’re just pumping out spider eggs. We counted nine egg sacs at various stages of development today. Here’s one proud mama with her gigantic egg sac. Yes, all that came out of little ol’ her. She’s looking a bit deflated since this weekend. 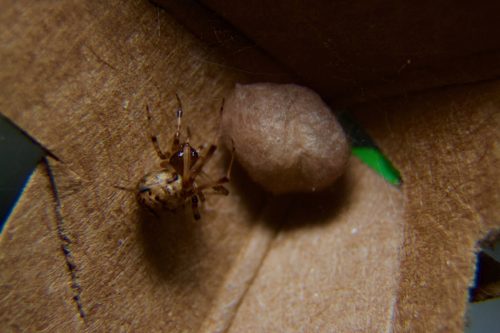 In case you’re wondering what you’re looking at, we cut up cardboard boxes that contained mini-cans of pop, which turn out to be just the right size for our sterilyte containers. We cut out the center of the boxes, leaving just the edges and corners, which makes for a nice frame for them to spin cobwebs on. The big advantage is that we can pick up the whole cardboard frame, carrying along the spider and her web undisturbed, and rotate it around to find where she was hiding. In this case, she’s snugged up in one corner of the light cardboard box with an egg sac that is, I swear, twice her size.

He helped, a little bit » « Why am I seeing variants of this same story everywhere?