Jacob Wohl and Jack Burkman are getting a lot of attention — I guess spectacular public pratfalls are a great way to get yourself a long profile in the Washington Post. Unfortunately for them, the profile is titled Meet the GOP operatives who aim to smear the 2020 Democrats — but keep bungling it. “Bungling” is the important word there.

There are many not so subtle digs, like the lead photo. 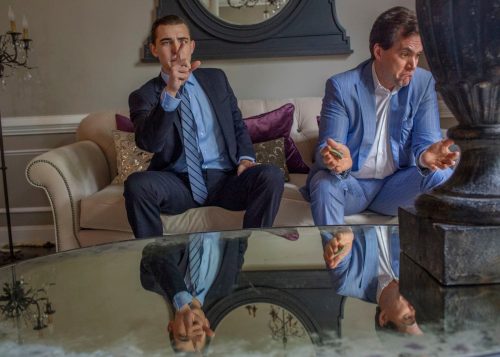 The expressions, the poses — this was not intended to flatter. Look at the length of Wohl’s tie, too. It’s not an important detail, but this is becoming a hallmark of the Trumpkin style.

Then there’s this description:

On Instagram, Wohl is prone to posting images of himself shirtless, staring into the camera with a come-hither look. He says he wants “what any other young man wants — fame and fortune.”

In his public appearances, he favors tightfitting suits and cultivates a serious demeanor. He swears by Garnier Fructis styling gel to shape his dark brown hair into a follicular architectural form with a gravity-defying ledge in the front.

I wonder if he even knows that he’s been dissed? Most of the article consists of our intrepid heroes claiming strong ties to various more infamous Republican operatives, followed by a paragraph in which a fact-checker called said Republicans to get frantic “I never knew these guys!” quotes. There are also summaries of their various failed exercises in rat-fucking.

Now the dilemma. If all publicity is good publicity, does this actually benefit the dopey duo?

The story that atheism will never live down » « Spider mission accomplished