Answers in Genesis got a dose of reality, and it slapped them hard in the face. They sent a pair of representatives to the American Alliance of Museums‘ National Conference, and boy howdy were they ever shocked. They had all-gender bathrooms and stickers to declare your preferred pronouns!

Drs. Purdom and Rivera are responsible for designing many of the wonderful programs, workshops, and other educational activities we offer here at the Creation Museum. But the potential usefulness of the AMA meeting was completely eclipsed by the “virtue signaling” and political correctness of the organizers.

It eclipsed it so much that Purdom and Rivera skipped the whole conference and went sight-seeing in New Orleans.

The whole point of a conference supporting LGBTQ+ individuals is to get that irrelevant stuff out of the way: the conference is about museum content, and by stripping away all the formalities, they streamline everything. Does anyone want to waste time correcting every single person who comes up to them and misgenders them? No. Put it on a sticker, put it in the program, put it on a conference slide, presto — no fuss acceptance.

One of the first things Georgia and Jennifer noticed when they arrived were the signs posted outside the restrooms. 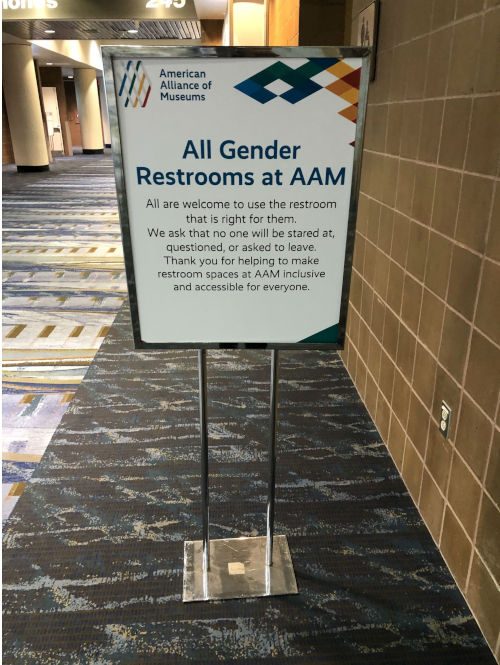 As you can see, the AAM invited everyone to use whichever restroom facility they wanted. Now, that view is anti-science, anti-genetics, anti-biology, and anti the truth about male and female. Jennifer said that, because the lines to the women’s restroom were long, several women left the line and used the men’s restrooms since the signs invited them to use whichever restroom they wanted. This is probably not what the organizers had in mind!

Science does not dictate society’s approach to gender issues, so that’s not anti-science. It’s not anti-genetics or anti-biology, because we know that sexual differentiation is complex and multi-layered, and isn’t the result of a holy book decreeing that there can be only two genders. Having to pee or poop is something all humans have to do, so it makes sense that such facilities can be used by all humans.

I suspect the organizers had the fact that attendees could use any facility that they wanted in mind — using a restroom is not some grand statement that requires a fanfare and a calligraphic testimonial about the nature of your particular gender. Again, the organizers want people to just get the job done so they can get on with the business of the conference.

In a further denial that we’ve been created male and female (Genesis 1:27), the convention featured ribbon stickers for attendees to attach to their name tags if they so chose. These stickers announced one’s preferred pronoun, and they came in three options: he/him/his, she/her/hers, and fill in the blank for whatever pronoun they preferred.

Clearly, the AAM wants to be seen first and foremost as an LGBTQIA+ ally. But, really, it’s an outright denial of biological and biblical reality—we’re created male and female. A denial of this truth leads to confusion and chaos, as was exhibited throughout the convention.

I’ve been to many conferences with this approach. I’ll be attending Convergence next month, where gender neutrality is taken for granted. It causes no confusion or chaos, but rather the opposite. How would they know that the convention was chaotic? They abandoned it the first day!

What the Hamites want you to think is that this was an example of persecuting Christians.

It’s interesting that the AAM was being very cautious not to offend anyone and to come across as welcoming, tolerant, and accepting to everyone . . . except for Christians or others who believe that we’re created male and female. They don’t care if they offend or isolate Christians, a trend we increasingly see in a culture that claims to be tolerant. What we see is that they are only tolerant of views that agree with theirs! It makes you wonder how many museums that belong to AAM have policies and teaching that align with these secular, unbiblical views.

So, having a sign on the restroom door that says you aren’t allowed to stare at, question, or threaten other users is offensive to Christians of his sort. Which of those three things did the AiG contingent want to do?

Most educated, aware professionals implement such tolerant policies as much as they can, and as educated professionals, they are a majority secular in purpose.

So really, this conference turned out to be a gathering not primarily about museum programs and workshops, but the AAM allowed it to be an LGBTQ agenda-driven conference disguised as a museum conference.

No, it was primarily about museum programs and workshops, open to all professionals, and how you peed was disregarded. Ken Ham just thinks a museum conference ought to be more about putting people into one of two bins.

Speaking of disguises, why were those two frauds even in attendance? The Ark Park isn’t a museum, it’s a church disguised as a science museum.

I’m happy to see, though, that we now have a simple way to keep creationist trolls out of our events. Just put this sign on the door. 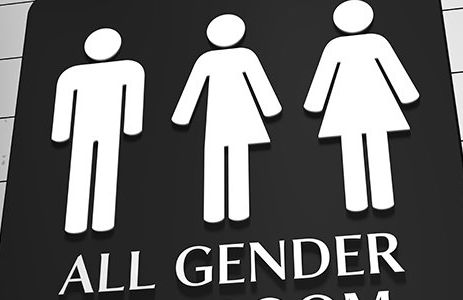 Big bonus: It’ll repel all those regressive atheists, as well! It’s amazing how much alike creationists and a certain ugly contingent of the atheist community sound.