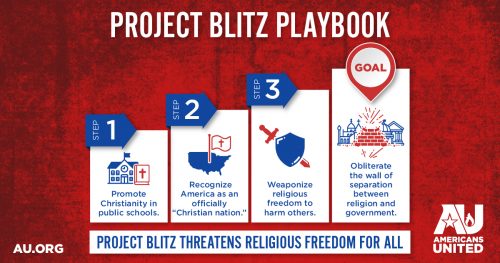 This isn’t new — Christians have been demanding the right to invade public schools for years — but now there’s a new coordinated effort to push the Bible into classrooms called Project Blitz.

Activists on the religious right, through their legislative effort Project Blitz, drafted a law that encourages Bible classes in public schools and persuaded at least 10 state legislatures to introduce versions of it this year. Georgia and Arkansas recently passed bills that are awaiting their governors’ signatures.

Among the powerful fans of these public-school Bible classes: President Trump.

You want to teach the Bible as a historical document? Fine. I have no problem with that. But that’s not what they want, because teaching it as one would, say, the Iliad, means contrasting it with the archaeological evidence, discussing its role, good and bad, in society, and examining its values critically. Achilles was a petulant, selfish killer…and so were those Hebrew warriors who committed genocide to secure their conquered territory. It would have to be taught as a piece of human literature, not some divine and infallible word of a god, and the theocrats who are pushing these laws are not intending that at all.

There is no critical thinking anywhere in their agenda. Take, for example, this teacher who eagerly leapt for a Bible class, because it was “easy”.

Maggie Dowdy said she picked this course because she thought it would be easy. After all, she already knew the Bible from church.

When the class started with the very first Bible story — the story of creation — she was glad she had chosen it. Here at last was the story of human origins that she believed in — not the facts of evolution that she had been taught in her high school science class.

“When I started learning about [evolution], I thought: ‘That’s not true. Here’s what I believe,’ ” Dowdy said. “I just kind of push it aside now. I know what I believe in. It’s just something the teachers have to teach us, but, no, I believe in creation.”

Other students echoed her. “We’ve always in science learned that perspective, evolution and the big bang,” Morgan Guess said. “This is the class that allows us the other perspective.”

That’s familiar: that’s Ken Ham’s relativism. If you’re ignorant of the evidence and don’t care about weighing the facts, you can just say that every interpretation is mere opinion, and that believing the earth is 6000 years old is just as valid as recognizing the evidence that it is 4.5 billion years old. But that’s not any kind of education or science! It’s saying that “I have a prior belief, I choose to only look at the assertions that reassure me it’s true.” It’s not “another perspective”, it’s willful ignorance, and it’s the antithesis of teaching and learning.

Americans United has a campaign to monitor and stop Project Blitz. There’s also a coalition of secular groups called Blitzwatch working to oppose it.

One danger is that even critical articles, like that one from the Washington Post, always portray the people implementing these religious practices as nice, normal, well-meaning people, the pastor next door type, who just wants their students to know how lovely the Beatitudes are. That’s the mask. It’s how they build popular support. But at some point the mask will slip — gosh, isn’t it a shame that gay people don’t obey the loving word of God? Then it falls off — the gay kids at this school are wicked and need to be expelled. Next thing you know a pious electorate is passing referendums to punish anyone who doesn’t heed their interpretation of dogma.

Stop them now, before it’s too late.

Doctor of doom » « Just because