Well, this is a dreadful image. It’s a reconstruction of a mass burial in Poland from 5,000 years ago. It’s mostly women and children who were murdered. 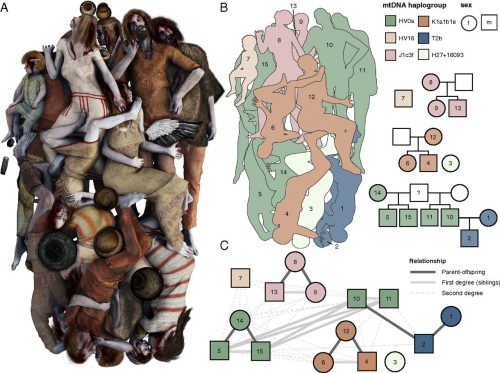 The interesting thing about it, illustrated above, is that they did DNA analyses of all the bones and figured out the family relationships.

Evidently, these individuals were buried by people who knew them well and who carefully placed them in the grave according to familial relationships,” they note.

Based on their research, the authors gained a startling glimpse into the families’ relationships. For example, they discovered that four of the individuals were brothers, but did not all share the same mother – though the similarities in the two women’s DNA suggest that their mothers may have been related.

One of the mysteries in the grave is the absence of older males in the grave, except for one father. This has led the authors to suggest that they were the ones who buried the people in the grave, who are mostly women and children.

Based on the nature of their injuries, the authors suggest that the people in the grave were captured and executed, rather than killed during fighting. This would fit the broader context of violence between competing groups at the time, in which women and children were often taken as captives.

The forensic analysis of the nature of the crime is fascinating, but the picture of Neolithic family structure more so, and this was a terrible tragedy that struck these people.

Now we just need to track down the individuals responsible for this horrific act and bring them to justice.