I’ll say something more substantial about this later, but Jordan Peterson opened his mouth and said something stupid, and I got slapped in the face with it this morning, and I’m still trying to recover. 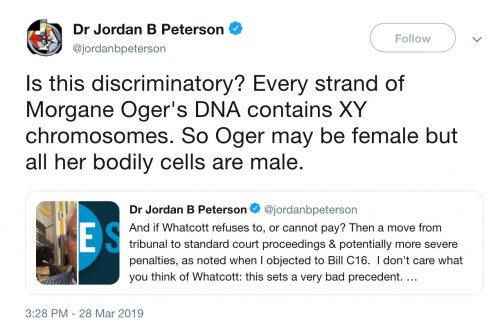 Morgane Oger is a transgender woman, and a court ruled that she’d been discriminated against and libeled by Christian flyer that was sent around that misgendered her and made various religious claims condemning homosexuality. This has obviously stirred up the conservative Christians and Jordan Peterson (but I repeat myself). What Peterson wrote is such flaming nonsense I’m going to have compose something to explain cell non-autonomous sex determination — and maybe some disambiguation about chromosomes vs. DNA vs. cells that I would have thought an “evolutionary biologist” like Peterson should already understand.

But then I made a mistake. A terrible awful mistake. I thought I honestly should look a little deeper into what Peterson actually says at length, because I know the first thing that will happen if I criticize that demented drongo is a swarm of his cultists would fall on me howling about how I have to listen to hours and hours of his lectures to understand him. So I tried.

I opened up one of his podcasts.

That thing is 2.5 hours long. Hours of garbage about…this.

Lecture II in my Psychological Significance of the Biblical Stories from May 23 at Isabel Bader Theatre, Toronto. In this lecture, I present Genesis 1, which presents the idea that a pre-existent cognitive structure (God the Father) uses the Logos, the Christian Word, the second Person of the Trinity, to generate habitable order out of pre-cosmogonic chaos at the beginning of time. It is in that Image that Man and Woman are created — indicating, perhaps, that it is (1) through speech that we participate in the creation of the cosmos of experience and (2) that what true speech creates is good.

It is a predicate of Western culture that each individual partakes in some manner in the divine. This is the true significance of consciousness, which has a world-creating aspect.

I listened to a half hour of it. It’s word salad delivered in a stream-of-consciousness fashion by a babbling loon who talks really fast. I gave up at around the 37 minute mark when he mentions that he’ll get around to talking about Genesis 1 shortly.

Now I have to get out of the house and go for a walk and spend some time in the gym to clear my head. I pity those people who willingly listen to this gomer at length.

Holy shit. After reading that drivel by Peterson, read this letter defending him by…Richard Dawkins. 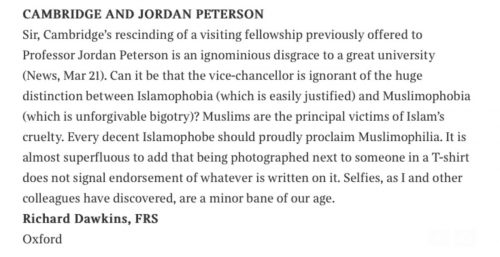 Once upon a time, I would have thought Richard Dawkins would have regarded giving a pretentious, empty-headed twit like Peterson a visiting professorship at Cambridge to be an “ignominious disgrace.” And jeez, whining about selfies is just so old-man-shakes-fist-at-clouds.

OK, now I’ve got to go out the door and away. Maybe I’ll also need to spend some time cooing over spiders to cool off.