I’m browsing, as one does, and reading a bit of labor history, and the name of my hometown, Kent, Washington, comes up. I had to look, because I knew that town well — I’m familiar with the streets, the major buildings, my father’s family lived there for generations, and it always seemed like a dead quiet small town that was never going to come up in history. There’s nothing there! Banks and gas stations, a five-and-dime, a sporting goods store, lots of little business and residences, and when I was growing up, it was mainly a farming community. They grew a lot of lettuce and cauliflower.

So what do I find? The mayor of Kent in the 1920s (before my time, before my parents’ time, but my grandparents would have been kicking around then) was an Exalted Cyclops of the Ku Klux Klan. This wasn’t Mississippi, but Washington state, and apparently the KKK had a surge of popularity in the 20s, to the point where a KKK member could be elected to office and I guess we were known as a “100% Klan town”. 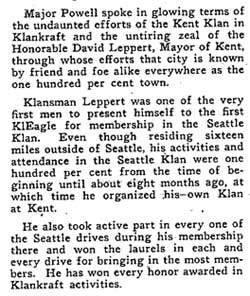 Notable Klan members elected to public office in Washington State include the Mayor of Kent, David Leppert, and Bellingham City Attorney Charles B. Sampley. Politicians who were likely members of the Klan include the Mayor of Blaine, Alan Keyes, and Wapato’s Director of Schools, Frank Sutton. Given that the Klan was a secret society, it is hard to differentiate Klan allies from Klan members, and it is likely that many other local elected officials in Washington state were Klan members.

Fortunately, their tenure was short and the Klan faded away fairly quickly, in part thanks to people who stood up against them.

Klan activity in the Valley reached its high point in mid-July of 1923. On July 14, the Klan held its first “Konvention” in the state of Washington near Renton Junction and initiated some 500 to 1,000 new members. A rally for the general public, complete with fireworks and multiple cross-burnings, was held that evening at Wilson’s Station four miles south of the park. The Kent Advertiser-Journal described “a monster crowd of thousands of people who came in between 2500 and 3000 automobiles to participate and witness the ceremony.” The Washington Co-Operator estimated that between 10,000 and 20,000 attended. The Globe-Republican, however, indicated that attendees were “attracted chiefly by curiosity and by the lingering suspician [sic] that an exciting clash might occur between Klansmen and representatives of Sheriff Matt Starwich’s office.” The state had a law forbidding public gatherings of masked persons except for masquerades and similar events. Before the rally, the Klan openly dared Starwich to enforce the law, and he insisted he would. The Klan backed down, however, and only wore the masks briefly. Seemingly, the dare was simply a publicity stunt and, if so, it worked. Starwich retaliated a month later by firing a deputy working on the Northern Pacific Railroad for taking part, commenting, “I won’t stand for any Klansmen being connected with my office.” Afterwards, reporting on the Klan dropped off sharply and activity quieted.

While they weren’t parading about in robes, though, they reflected a real problem in that community. People might have chastised the Klan, but at the same time, they’d later applaud internment of our Japanese compatriots.

Traditionally, the Klan has been portrayed as a violent, backwards-looking, and extremist organization that was part of the conservative mood that followed World War One. Recent works, however, emphasize that, for better or worse, the Klan was rooted in the mainstream of society, often attracted leading citizens in communities throughout the country, and championed popular causes. This was the case with the White River Klan. While it is difficult to discern why people in the Valley joined the Klan from newspaper accounts that we have available, Klan ideology clearly spoke to fairly common sentiments. For example, Prohibition enforcement was a major issue in Auburn politics and the Klan’s call for rigorous enforcement was not out of the ordinary at all. Similarly, there was substantial, mainstream, anti-Japanese sentiment. The state of Washington, not the Klan, passed Alien Land Laws to prevent Asian immigrants who, by law, could not become citizens from owning or renting land. When Klan organizers like Jeffries spoke out against Japanese immigrants, they found a receptive audience. Lastly, the sheer spectacle value of the Klan should not be overlooked. The Klan had a mystique surrounding it. People were curious about it and rallies provided entertainment. Most of those who attended meetings and rallies went because it was something to do and did not join, regardless of their feelings about Klan ideology.

Most of that lettuce and cauliflower was grown by Japanese families; my wife worked in those fields in the summer when she was growing up, and I worked in a nursery owned by a Japanese horticulturist throughout high school. They didn’t speak about it, but there was this poison soaking in our town from the time the Klan was thriving there.

I suddenly have a different perspective on my childhood home.

Wheee! It was off to the emergency room with meee! » « Here’s how you evaluate the scientific rigor of a field