An interesting take on the psychology of Trump:

Donald Trump is an anger troll. Rage is the one thing he capably nurtures and grows. He stoked anger in people horrified by Kavanaugh’s confirmation and is now turning it against them. This is an old tactic: drive people crazy, then call them so. As projects of government go, this one is as familiar as it is contemptible. He wants to make his followers feel threatened. To achieve this, he needs his opponents to seem irrational. So he sets about making them angry.

He insults them, railroads them, calls people protesting for justice liars and profit-seekers even as he openly enriches his friends. He gives them offensive nicknames and mocks their pain for fun, and to get them to lose control. He’s doing this in plain sight—it’s pretty obvious why people are angry—but his goal is to make their reaction look inexplicable, beyond the pale. After leading angry crowds to yell abuse at anyone he points to, he turns around and marvels at how irrational and dangerous his targets are.

As tactics go, this one is dumb and transparent, but it’s worth describing it because it works. It works a lot. Trump is not a genius. But he instinctively understands the dynamic of provoking and then delegitimizing someone else’s pain. As Adam Serwer wrote, he’s energized by the suffering he causes others and—secondarily—by the bond that ritualized cruelty forges with his base, which has been connected by fear of others. From Trump’s perspective, it’s kind of fun that people feel compassion for the families he separated. It’s delightful that women are worried about rights he has expressly said he wanted to take from them. And, after insulting and belittling people he’s supposed to be governing, he enjoys acting surprised that they mind.

It’s a silly and ugly game, but it’s the only true rule of Trumpism: be the sorest winner imaginable. Aspire to nothing but power and status. Hold no principle sacred. Withhold justice and insult those who object. Yes, the effects of this are predictable. It doesn’t take a genius of social engineering to be the “why are you hitting yourself?” guy. All it takes is a willingness to be him.

Yeah, that’s the man. But it’s only half the problem: the other half is an electorate that falls for it every time, that fails to recognize that a lack of principle and a narcissistic need for power are bad things, and not a sufficient reason to give the narcissist the power he craves. Slightly more than half the population sees right through him and is really pissed that the orange troll has gotten what he was after — they are righteously angry — and the remainder have completely fallen for the lies and are in a mad race to hurt themselves even more. 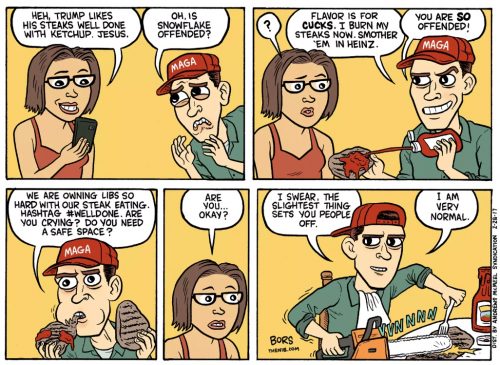 We need to own our anger, because that’s the alternative. Our rage is aimed at a deserving target, their rage seems to be self-inflicted.