I expect teachers to do better. I expect them to have some standards and some social awareness. So why, at the expo held in Minneapolis this year, did they allow these regressive scum to have a booth there? 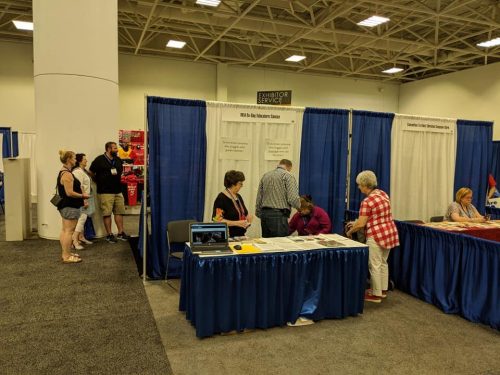 Here’s another group that was represented at the conference. 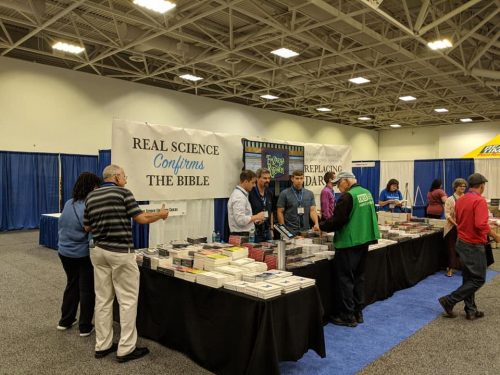 WTF? What is the NEA thinking? This is an anti-science group supported by Answers in Genesis!

For 17 years, Answers in Genesis has voluntarily supported the Creation Science Educators’ Caucus at the largest meeting of public educators in the world—the NEA (National Education Association) convention. It is one of the most liberal organizations in America today, promoting homosexual behavior, abortion, etc.

AiG as a ministry would not normally be allowed to have a booth at such a humanistic convention, but AiG has been invited by the Caucus to be a major part of staffing its convention booth and providing resources to be given away to public school teachers and leaders. Over the years, tens of thousands of books, booklets, DVDs, and other resources have been freely put into the hands of public school teachers, and each year hundreds of educators have been engaged by our witnessing team at the Caucus booth.

In all, over $70,000 worth of resources (a significant amount of the funds for this was given by special donors) including about 2,000 Check This Out DVDs, plus 2,000 other DVDs, 1,100 books, and 600 magazines were freely given to the public school teachers over the six day conference!

But there’s also another one: history. The NEA is stuck with bad caucuses because of antiquated rules.

Even more curious: The NEA Creation Science Educators’ Caucus. This one apparently was formed decades ago under earlier rules, when a caucus needed only one member to win recognition. It still has only one member, its founder, whose primary purpose is to distribute materials that argue for an alternative to evolutionary science. Tony Ramsek, a volunteer for the group—not a delegate—told me it plans to give 3,000 DVDs away at the convention. He emphasized that they’re not for classroom use: “We want to educate the educators,” he said.

Here’s an idea, NEA — join the 21st century, purge the anti-science, anti-human bullshit from your meetings, and support good education. Right now, you’re setting a terrible example. The Creation Science Educators’ Caucus is clearly a single kook being used as a tool to allow AiG to pour money and lies into the conference. Plug that leak.

Please, stop with the goofy fads » « So civil!