I’m suddenly seeing a lot of contempt for the humanities, goaded on by people like Jordan Peterson, who has said the humanities are not only dead but foully rotten. I disagree, of course, and would like to point out that history is one of the humanities (not to disparage the other branches, though — I’d be happy to write a defense of all of them). That we’ve forgotten, or choose to forget, much of our history is a problem. Case in point: Jeff Sessions’ denial that the policies he supports resembles those of Nazi Germany.

“Well, it’s a real exaggeration, of course. In Nazi Germany, they were keeping the Jews from leaving the country,” Sessions said. “We need to think it through, be rational and thoughtful about it. We want to allow asylum for people who qualify for it, but people who want economic migration for their personal financial benefit, and what they think is their families’ benefit, is not a basis for a claim of asylum.”

Whoa. Sessions is acknowledging implicitly the similarity between Nazi Germany and 21st century USA, and is straining to find some little difference between us, and that’s the one he wants to claim? Perhaps he needs to be reminded of Nazi policy.

Toward the end of the 1930s, and especially from the latter half of 1938, massive Jewish emigration from Germany and Austria became an explicit objective of Nazi policy.

He might also want to learn something about Nazi propaganda. Der Ewige Jude portrayed Jews as parasites, in Germany to prey upon and profit from good German human beings; further, it blamed them for organized crime, generally violent tendencies, and rape. How has Trump characterized immigrants? No differently.

The Nazis did not suddenly burst upon Europe with concentration camps and mass executions. They started with a little seed of anti-semitism and nurtured it until it flowered into the Holocaust. It’s the same here; this is how it’s done, with a gradual ramping up of the offenses against humanity until we get to full blown atrocities. Catch it early. Nip it in the bud. Of course, you can only do that if you’ve studied the humanities.

While the Republicans are hurtling headlong into evil, I can’t excuse the Democrats, either.

Sen. Dianne Feinstein (D-Calif.), who spearheaded legislation to ban the separation of families at the border, also linked the detention policies to World War II Germany.

“This is the United States of America; it’s not Nazi Germany,” Feinstein told MSNBC’s Chris Hayes on Monday. “We don’t take children from their parents. Until now.”

Until now? I am reminded of how wrong that statement is every day: located right next to the science building where I work is an old brick building, the last vestige of the Morris Industrial School for Indians, founded in 1887 by the Catholic Church as a boarding school for Indians. We separated children from their parents, sometimes forcibly, sometimes with economic pressure, and we held them captive for years at a time. Approximately two thousand kids were held here over the lifetime of the school.

…like other boarding schools, the Morris program alienated students not necessarily adverse to learning to read and write. Only English was to be spoken; the curriculum emphasized the value of the white man’s way and at least implicitly the evil of the child’s home.

We don’t have a lot of stories about what went on inside the school — control was fairly complete, the administrators had power over what was written by a student body brought in largely illiterate. But some accounts exist.

Methods of discipline at Minnesota boarding schools were harsh. Some schools had cells or dungeons where students were confined for days and given only bread and water. One forced a young boy to dress like a girl for a month as a punishment; another cut a rebellious girl’s hair as short as a boy’s. Minnesota boarding schools recorded epidemics of measles, influenza, blood poisoning, diphtheria, typhoid, scarlet fever, tuberculosis, pneumonia, trachoma, and mumps, which swept through overcrowded dormitories. Students also died from accidents such as drowning and falls.

Boarding school staff assigned students to “details”: working in the kitchen, barns, and gardens; washing dishes, tables, and floors; ironing; sewing; darning; and carpentry. The schools also extensively utilized an “outing” program that retained students for the summer and involuntarily leased them out to white homes as menial laborers.

One of Minnesota’s most famous boarding school survivors is American Indian activist Dennis Banks. When he was only four years old, Banks was sent three hundred miles from his home on the Leech Lake Reservation of Ojibwe, in Cass County, to the Pipestone Indian School. Lonesome, he kept running away but was caught and severely beaten each time. Another student, at St. Benedict’s, recalled being punished by being made to chew lye soap and blow bubbles that burned the inside of her mouth. This was a common punishment for students if they spoke their tribal language.

Another reminder: Adolf Hitler admired and emulated the American methods of genocide.

The idea of a prison camp – specifically Auschwitz, in Oświęcim, Poland – where Hitler’s soldiers could shoot, hang, poison, mutilate and starve men, women and children en mass was not an idea Hitler, the bigot, came up with on his own. In fact, the Pulitzer-Prize winning biographer John Toland wrote that Hitler was inspired in part by the Indian reservation system – a creation of the United States.

“Hitler’s concept of concentration camps as well as the practicality of genocide owed much, so he claimed, to his studies of English and United States history,” Toland wrote in his book, Adolf Hitler: The Definitive Biography. “He admired the camps for Boer prisoners in South Africa and for the Indians in the wild west; and often praised to his inner circle the efficiency of America’s extermination—by starvation and uneven combat—of the red savages who could not be tamed by captivity.”

We say, “Never forget”. We’re damned good at forgetting, though, which is why we’ve got a great big sign out in front of that building to remind us. 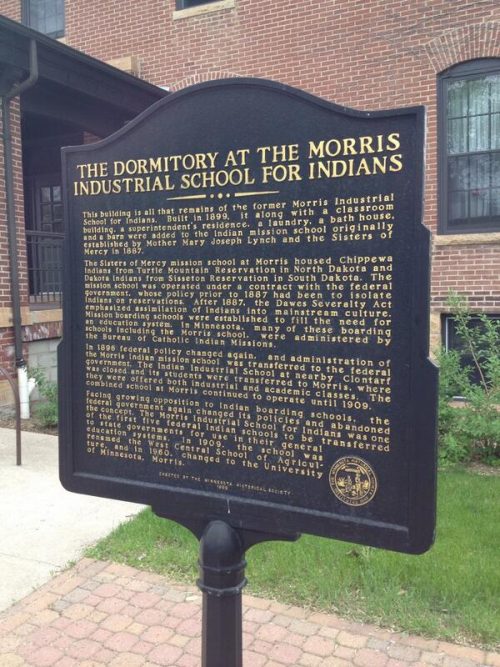 I haven’t even mentioned the willingness of Americans to enslave people and break up families if it profited them. There has been no end of evil committed by the people of this country, and now Feinstein wants to claim “We don’t take children from their parents”? When have we not? This country was founded on slavery and the slaughter and re-education of its native people.

We can’t change the past. We have to bear the burden of our history forever. The one thing we can do is to move beyond the past, be better, grow and change to never again commit these crimes against humanity, to not be evil. Jeff Sessions, Donald Trump, and the Republican party seem to be committed to the idea that our national character must be one of oppression and persecution forevermore, while the Democrats choose to live in a fantasy past that denies our history…which enables the crimes to continue.

Speaking of the humanities… » « Not even a wire monkey