Crispian Jago is dying of renal cancer, and he’s been writing an account of the progression of the disease. It’s a grim read, except that Jago is resolutely stolid throughout, determined to make the best of his remaining months. It’s just so British.

I’m an American. If I were in a similar situation, the story would be full of whining, wailing, caterwauling, hot tears, and angry denunciations of the universe. At some point I’d probably lash out, launching a cruise missile at some blameless smaller country that had said something that annoyed me. So it’s an interesting contrast.

He does have a bit of anger in him, but he reserves it for those who deserve it. Read the illustrated chapter, the Book of Extremely Tedious Oncological Platitudes, in which he takes on all the people who have been giving him advice on how to cope with cancer. 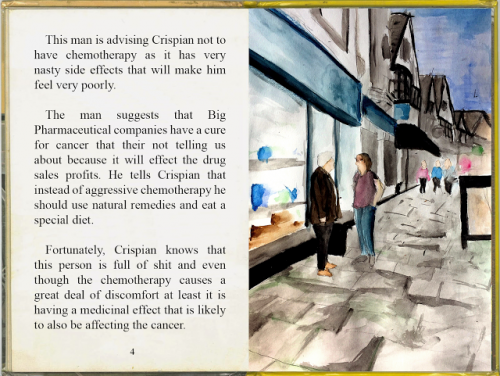 Friday Cephalopod: at last, my pretty, I have you trapped! » « For the UK readership