Imagine that you are going to come visit me in Morris, Minnesota — you’re welcome, anytime, since it’s not as if we’re overwhelmed with visitors. You’ll probably come from our major metropolitan center to the east, Minneapolis/St Paul. Get on I-94, heading west; follow the signs to Fargo.

As long as we’re imagining, imagine it’s mid-winter and late at night. That’s the best time to drive the lonely roads. You usually don’t have to worry about the condition of the highways, because it’s Minnesota, and if it’s been snowing there will have been teams of plows out, quickly clearing them.

You leave the big city, and you’ll pass through the smaller, but still substantial, city of St Cloud about an hour later. Prepare yourself, everything from there on out is progressively more rural and thinly populated.

Don’t drive all the way to Fargo, although it would be easy to do. Get off the freeway at Sauk Centre, birthplace of Sinclair Lewis (and they won’t let you forget it). Sauk Centre has a population of about 4500 people, and it’s mostly downhill from here. You’re going to get on a little two lane country road, Highway 28, and keep heading west through Glenwood (pop. 2500), Starbuck (pop. 1300), and Cyrus (pop. less than 300). It’ll take you about an hour to get from Sauk Centre to Morris, and you’ll need to take your time, because Highway 28 is a notorious speed trap all along its length.

I recommend the night journey in winter because while there isn’t much engaging scenery, as you travel farther and farther from the population centers, it gets darker and darker. Our winter skies tend to be crisp and clear, and you’ll get spectacular views of the stars, and if you’re lucky, you’ll see the northern lights off to your right. You’re in no hurry — we’ll be home to let you in however late it is when you arrive — so feel free to pull over, turn off your headlights, and let your eyes get adjusted to the dark. It’ll be beautiful.

Unless it’s gray and snowing. Sorry. That happens fairly often.

After passing through Cyrus, which you’ll only notice because the speed limit abruptly drops to 30 miles per hour (and trust me, you’d better obey it), you’ll hurtle on through the darkness. The first portent that Morris is ahead will be three slowly pulsing red lights in the sky. They were my first sight of the town when I came here, 17 years ago. They are the aircraft warning lights atop the radio antenna masts around the edge of town. They’re particularly noticeable as you drive through the flat and empty cornfields because they hover above the horizon and are so clearly human artifacts, but there isn’t the usual clutter of a cityscape to distract your attention from them.

Two hundred years ago, there were very few Europeans here — an occasional French explorer — but many scattered communities of the Lakota, their populations depleted by waves of diseases. They, like virtually every human population around the world at that time and earlier, had networks of communication with other communities. Like every population up to that time, though, communication required that someone get up and get on a horse or boat or on their own two legs and travel elsewhere. The transmitters and receivers and medium of signaling were the people themselves. A village would have a trading post or post office or the equivalent as locus of interactions between communities. 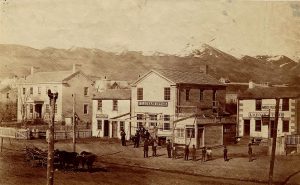 About one hundred and fifty years ago, that began to change with the invention of railroads and telegraphy. At that point we added rails and wires connecting communities for much more rapid signaling, and the new features added to our towns were the telegraph office, the railroad depot, and the water tower. Every thriving town would have a water tower and supplies to feed the locomotives, and would be linked to other town with a parade of telegraph poles.

This was the start of a revolution. Now towns were linked by cables and rails, and that was only the start; look up, and everywhere you go there is a webwork of wires above you, carrying power and information. There is also an invisible network of cables and pipes and fiber optic lines beneath your feet. We’re part of a grid of connections, the middle part of a sandwich of layers and layers of connectivity that bridges the continent, with steel giants marching across the landscape carrying high tension lines. These humming wires are the ley lines of reality.

But it was only the start. A bit over a century ago, there was another change: it was the age of Marconi and Tesla, spark-gap transmitters and coherers. They scarcely knew what they were doing, at first, building larger and larger devices with greater and greater voltages, generating great powerful thunderbolts that would arc across circuits and produce immense electromagnetic waves that would ripple long distances. They were crude radio transmitters, no finesse at all, that relied on brute force to produce strong enough signals that could be detected without wires. So Marconi built forests of antennae in Poldhu, Cornwall and Cape Breton Island, Nova Scotia to sense the sparks produced in each and bridge the ocean with information. 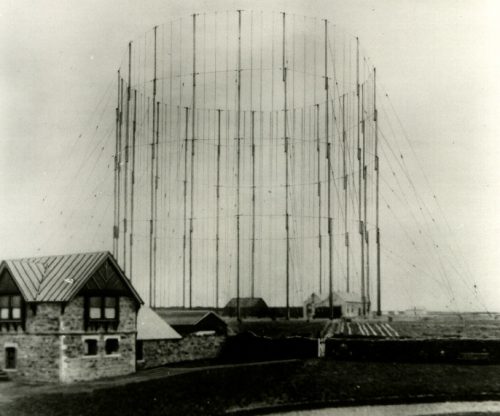 The transmitters have gotten more precise and the receivers more sensitive, and now we swim in an ocean of patterned electromagnetic waves. We routinely carry radio transmitters in our pockets — absent the whip-crack snap of spark-gap transmitters or the lightning nimbus of Tesla coils — and we receive a constant flow of signals with far more elegance than the slow dots and dashes of Morse code. There’s an antenna in your pocket, there’s an antenna in your computer, there are antennae in your entertainment gadgets, and there are antennae all over your town. They are a new feature of humanity, these metal latticeworks scraping the sky for information everywhere you go. Even in my tiny town in the rural midwest, on the edge of nowhere, in ‘flyover country’, everywhere you look there are cables and antennae tying us to the larger world.

This long prelude is an attempt to justify trying something different. You see, I’ve been distracted lately — for the past couple of years, in the face of aging, I’ve been cultivating an exercise habit. I walk 5-10 kilometers a day. Three times a week I go to a local gym and work out…and I get there by walking. I walk to the grocery store. I walk to the coffee shop. I walk to the movie theater. It’s all part of a necessary maintenance program for my unfortunately senescing body.

As it turns out, it’s difficult to read or write or scan the internet while walking or lifting weights — who knew? I’ve tried listening to podcasts, and still do, now and then, but I still have to stifle my urges to write responses, because I can’t. I hate this whole routine of having to invest time in maintaining the meat of myself when I’d rather be sinking it into the playground of the mind, but then, I have to remind myself I need to do this so my brain can keep playing longer.

So there I am, making the meat machine plod through town, my brain trying to idle and get it over with, and it can’t.

I look around. I scan the ground, I look at the rooftops, I notice odd stuff. I’m a scout droid patrolling an alien planet. I try to figure out what’s going on around me, but I’m hampered by the fact that I don’t have access to information, or rather I’m wasting time perambulating rather than tapping on a keyboard, so instead I…

This is a terrible confession. Instead, I make stuff up. I tell myself stories, in my head, about the imaginary purposes of the things I don’t immediately understand. They’re all lies. I think I’ve reinvented religion and fiction. So while disconnected from the internet and my books, I make up conspiracy theories, alien invasion stories, weird fantasies of malignant forces dwelling in town, awful dreams of where all this will end (it tells you something about me that I tend not to invent happy stories). I glom onto some odd feature of the environment and invent a purpose for it. It’s disgraceful. This is what happens when your brain is deprived of input, the gears get stripped and it starts spinning off in strange directions.

Lately, the features of the environment that have most snagged my imagination are the antennae. They’re everywhere! Have you noticed? Radio masts, cell phone towers, little whip antennas erupting out of the flank of a 19th century building, dish antennae locked into satellites, metal spikes on rooftops, we’re surrounded by these things that are either gleaning information out of the æther or beaming it to mysterious destinations. I know they’re mostly innocuous and utilitarian, but bored brains imbue the unknown with deep omens and surprising significance.

Shamelessly, I’ve been telling myself stories about them as I amble about. These are pure fiction, lies, which I’ve never indulged in before. But I’m thinking, as long as I’m making stuff up, I might try writing some of it down. And then posting it here.

So I may sporadically dump some of these lies here. Not often, I assure you, and they’ll be clearly labeled as entirely fictitious, but you know, when you spend so much time with these stories, and you’re used to just writing, it’s got to be let out. Every once in a while, then, I might post a story about the Antennae of Morris. You can just skip them. Treat them as the mad ventings of a trapped brain trying to get release, you know, as I do most of the fiction I read.