They don’t even have to write their own jokes any more! 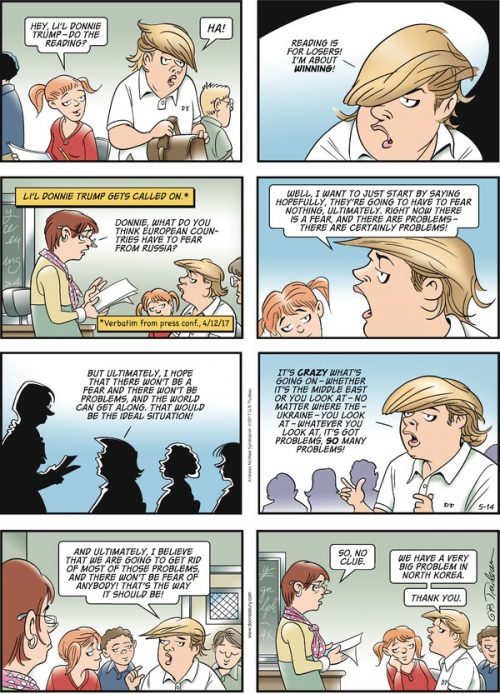 Doonesbury: Well, I want to just start by saying hopefully they’re going to have to fear nothing, ultimately. Right now there is a fear and there are problems, certainly problems, but ultimately I hope there won’t be a fear and won’t be problems and the world can get along. That would be the ideal situation. It’s crazy what’s going on, whether it’s the Middle East or you look at no matter where, the Ukraine, you look at — whatever you look at, it’s got problems. So many problems. And ultimately, I believe that we are going to get rid of most of those problems and there won’t be fear of anybody. That’s the way it should be.

Those word balloons contain obvious bullshit from a bullshit artist — they sound exactly how a kid who hasn’t done their homework sounds when called on in class. It’s ridiculous. It’s meaningless noise. It’s not even good or entertaining bullshit.

But there’s that little note in the third panel: “verbatim from press conf., 4/12/17”. I know, it’s Trump, so of course it’s possible that such crap dribbled out of his mouth, but I had to check. Here’s a partial transcript of his answer, and if that’s not good enough, there’s video of the press conference — skip ahead to about 25:50 to hear the reporter’s question and his ludicrously stupid reply.

I think Garry Trudeau would agree that his ease and comfort in generating text for his cartoons is not adequate compensation for having to live with that boob in charge of the government.