This is the Octoprof. Do not be shocked at its frightful appearance. 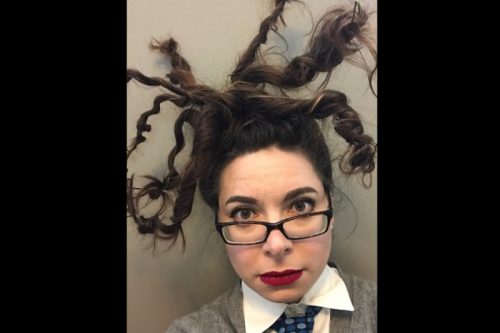 The Octoprof is a Lesser Blue-Ringed Octopus (Hapalochlaena maculosa), who is a postgraduate at the University of the Gulf of Mexico, Shallow Waters (not her native habitat; she’s Australian, but emigrated to be closer to larger populations of her research subjects). Her focus of study is the reproductive biology of the invasive terrestrial species Homo sapiens – an animal which has of course been a source of tremendous concern amongst terrestrial biologists over the past thousand-ish lunar cycles, especially those whose research has a conservation focus.

Owing to a peculiar birth defect which gives her a faint but noticeable resemblance to the detested Homo sapiens (she has a serious malformation of the mantle and of two of her tentacles, which gives her a ‘face’ and ‘hands’), the Octoprof feels a strong and frankly embarrassing affinity for her research subjects. She has been criticized heavily for this unprofessional attitude by her fellow academics, most of whom would understandably prefer all research funds concerning homo sapiens to be focused on eradication measures.

It’s going to appear at the Minnesota Fringe Festival, 3-13 August, and is apparently trying to raise money to attend the event. I hope it can raise a surplus and use the excess to pay for cosmetic surgery.

How does it breathe? I don’t see a siphon, unless it’s those two tiny holes in the front of its cephalon — they’re so small it certainly can’t use them for propulsion. Poor thing.

The Trump voter » « Calling them transphobic is exactly like dropping a nuclear bomb on them!