It’s a Catholic magazine, and Anthony Barcellos sent me a scan of their letters page. It’s very enlightening. 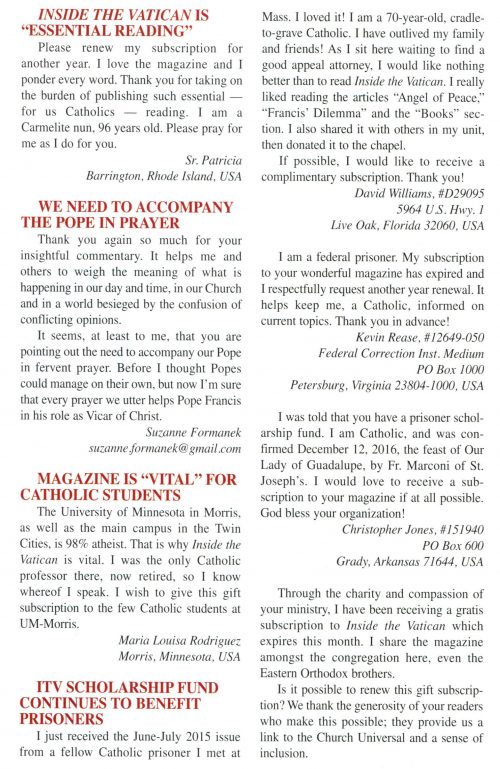 The things I learned from this sample:

What caught Anthony’s eye was this letter:

MAGAZINE IS “VITAL” FOR CATHOLIC STUDENTS

The University of Minnesota in Morris, as well as the main campus in the Twin Cities, is 98% atheist. That is why Inside the Vatican is vital. I was the only Catholic professor there, now retired, so I know whereof I speak. I wish to give this gift subscription to the few Catholic students at UM-Morris.

I do not know who Maria Louisa Rodriguez is — she may have retired before I got here. But there are a few errors in her letter. Catholicism is the single largest religious denomination in Minnesota, with about a quarter of the population, and while universities do have their demographic biases, I rather doubt that we’d be able to exclude Catholics that thoroughly, especially since we don’t have any filters in admissions that would discriminate.

I wish I could say specifically that I know Catholic students, but since I don’t attend the church, and I never ask any of my students what they do on Sundays, I don’t know. Also don’t care. It’s not as if I would put a question on an exam about it.

I do happen to know that a couple of faculty members are Catholic, so I guess we’ve been backsliding since those halcyon, Catholic-free days immediately after Ms Rodriquez’s retirements.

I’m also curious about what’s going on in the UMM Newman Center, this lovely building just off campus, a few blocks from me. Apparently all the photos on that page of students there are photoshop fakes, their schedule of Catholic-associated events are a lie, and the coordinators are all making it up when they claim to be students.

Uh-oh. Maybe the lesson I should learn is that the old jailbirds who write in to Inside the Vatican are all making crap up.

It’s Tax Day in America! » « Friday Cephalopod: Squid, on the other hand, are delicious