Sally Yates, the acting US attorney general, announced that she would not defend Trump’s criminal executive order banning travelers from some Muslim countries.

You will not be at all surprised to learn that she has been speedily fired and replaced.

You might, however, be very surprised at how petty and unprofessional the announcement from the White House was. 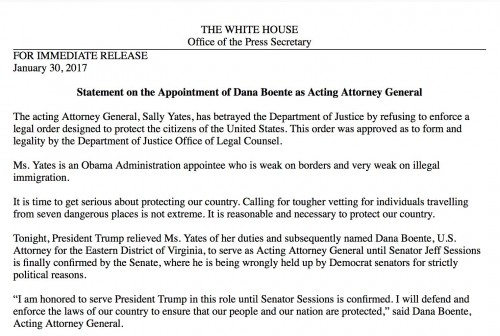 That sounds like it came straight from the raging, petulant sphincter of Mr Trump himself, doesn’t it? I’d sure like to see a recording of the tantrum he threw when Sally Yates demonstrated that she was a person of principle and integrity.

I hope she lands a better job soon.