Maybe he was reincarnated as Donald Trump. Hey, Trump was born in 1946, while Streicher was executed in 1946. Coincidence? Or FATE?

Further the president said that the Secretary of Homeland Security will be publishing a weekly list of crimes committed by immigrants, and of the cities that refused to turn them in for deportation. The order doesn’t say whether the list would single out only undocumented immigrants, or all immigrants.

The article compares this list to one regularly published in Breitbart. Pfft. We know better. Breitbart is just the slimy descendant of Der Stürmer.

Oh, interesting. Here’s a map of the countries where he’s blocked immigration. 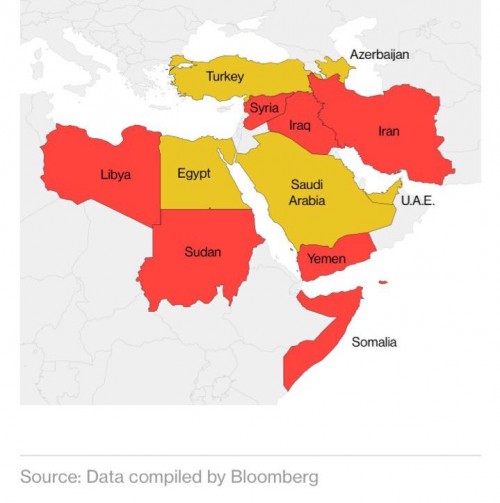 All those colored countries are mainly Muslim. The red ones are the bad Muslim countries; the yellow ones are the countries where Trump has business interests. No terrorists in Saudi Arabia, I guess, just money.

When are the impeachment proceedings beginning?

Hey, Minnesotans! They’re planning a March for Science Minnesota! » « My alma mater has a fascism problem