The Ark Park and the yokels who visit it are made for each other. An article Louisville Magazine describes the awe and wonder the fake ark inspires in attendees.

Golly, someone said when the Ark came into view. Oh my goodness.

Four guys built that, another man said. Unbelievable, isn’t it?

Yep, sure is unbelievable. Here’s a photo of an early phase in the construction. 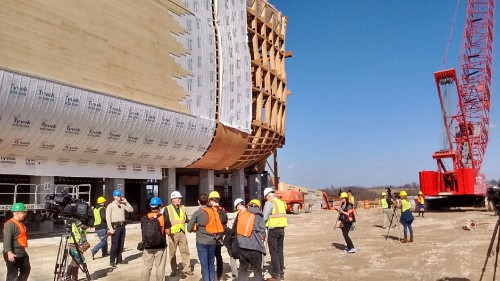 One, two, three, many. Yes sir, four people made it.

Then there’s the point where visitors explain that gravity doesn’t exist.

Gravity has never been proven, because gravity is a large object attracted to a smaller object, and it’s never been seen. If gravity existed, a BB and a bowling ball should bump into each other. So you see how guys like Newton get caught in their own lies.

The reporter asked Georgia Purdom a rather fundamental question: why?

We want people to see that the Bible is true, Purdom said. Just as there was a judgement in Noah’s day, there’s another judgment coming, and those who don’t know Jesus Christ as their personal savior will spend eternity in hell.

But really, my favorite part is where he asked Andrew Snelling for evidence that dinosaurs and people lived at the same time. Easy, he claims.

Purdom introduced me to geologist Andrew Snelling, who followed Ken Ham to the U.S. from Australia and for the last nine years has been the director of research for Answers in Genesis. I said,
“There were dinosaurs on the Ark, right?” Snelling nodded. Right.
“Then why aren’t there dinosaurs today?”

Dinosaurs went extinct after they left the Ark. After the Flood, we had the Ice Age. We had a radically different world. Some creatures weren’t able to adapt. But most cultures in the world have some legend about dragons, and these dragons are actually a good description of dinosaurs. The Chinese, for example — their dragons are depicted on scrolls pulling the chariots of emperors. And there was a story called Beowulf in which the king slays a dragon, and this happened in Norway.
“So you take Beowulf to be evidence of dinosaurs existing?”
Yes, Snelling said. It was an eyewitness account.

Huh. I just happen to have the Heaney translation of Beowulf right here, and this is the description of the dragon.

Unyielding, the lord of his people loomed
by his tall shield, sure of his ground,
while the serpent looped and unleashed itself.
Swaddled in flames, it came gliding and flexing
and racing towards its fate.

So it’s kind of a writhing, scaly, giant, worm-like creature. That breathes fire. That’s definite; it repeatedly talks about flames and smoke and burning. Are we then to believe that dinosaurs could breathe fire?

Here’s a Chinese dragon dinosaur for you. It doesn’t look much like any dinosaur species I know of, but apparently we are supposed to take “eyewitness accounts” as the gold standard. 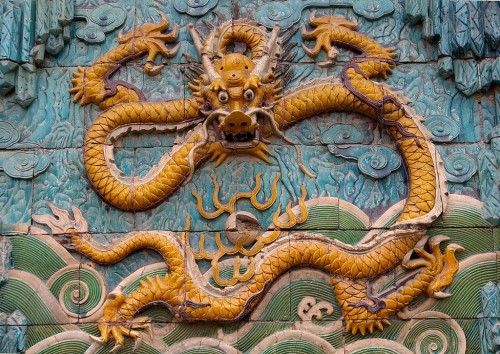 How are you spending the last day of American civilization? » « I get email…from the presidential inauguration committee?