I’m sure I’m not alone in having spent my spare moments where this election went wrong.I have a few ideas, but first let me say where I don’t place the blame.

So whose fault was it?

The machinery to make Donald Trump president of the United States had been idling for two decades waiting for Trump or someone very much like him to come along, set off the afterburners, and zoom off with the entire party. Just to use our previous example, while nobody on your television Tuesday night saw fit to make much of it, the Republican triumphs in several states were helped immeasurably by the mechanism of voter suppression that had been painstakingly built by state legislatures and painstakingly reinforced by the larval Rehnquists who’d been salted throughout the federal judiciary. It was just sitting there, the entire mechanism, waiting, its full power as yet untested because no conventional politician wanted to push the mechanism to full limits, because very few conventional politicians wanted to risk the damage to the institutions of democracy that might occur if that machine revved up to full throttle.

I blame the Republican party, too. They’ve been feeding this beast for decades. Trump was not an anomaly, but a logical conclusion.

It has been said that Trump hijacked the Republican Party. This is said by Republicans who still wish in their timid dreams that Ted Cruz or Marco Rubio had been strapped into the machine for another safe run on the same old track. That is not entirely true. He didn’t hijack the machine. He just turned it into a high-performance vehicle. Trump’s visceral appeal—the sexism, the racism, the xenophobia, the crude stupidity and know-nothingism, the appeals to a lost America, to people who most deeply felt its loss, none of whom was him—was merely fuel of higher octane than anyone had dared put into the machine before. He poured it in by the gallon, disengaged the emergency brake, mashed the accelerator to the floorboard and was off.

The white middle class has been soaking in Rush Limbaugh and Glenn Beck and Michael Savage and Alex Jones and Fox News. The Republicans embraced it. The Democrats provided nothing to counter it.

So what do we do now? In the short term, we fight. We oppose everything Trump stands for every step of the way. We learn from the Republicans: intransigence and obstructionism doesn’t hurt your party when the public despises the government as it stands. No more making nice, no more of this “reaching across the aisle” bullshit. Kill Republican policies dead whereever you can, and for once, the Democrats have to be vocal about their opposition.

In the long term, the Democrats have to wake up and realize that a comfortable slight edge isn’t enough, especially when Republicans cheat like hell with gerrymandering and voter suppression. That means they have to take a deep look at what they’re doing — they might have to give up those nice benefits from monied interests to actually appeal to workers, the poor, and the voters who don’t pour money into the trough. Clinton spent twice as much as Trump on the campaign — maybe we should realize that feeding the advertising machine isn’t as valuable as feeding the needs of the electorate. 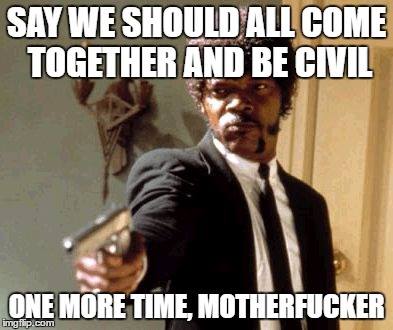 What I’m afraid will happen, though, is that the Democrats will turtle up and play even more cautiously. They’ll look at the fact that they won the popular vote by a slim margin and think that all they have to do is change nothing and wait for the rising tide of minorities to eventually lift them into power. They must not do that. We will be surprised again. This is not a horserace. We are not gambling. We are not playing the odds and hedging our bets.

I’ve lived through three crushing political disappointments now: the elections of Reagan, Bush II, and now, Trump. It’s tempting to say we’ll get through this and have a better day in 2020. The lesson I’ve learned is that we won’t: that I lived through them doesn’t mean that others didn’t suffer and die. Reagan presided over the deaths by negligence of so many gay people; he laid a foundation of racism and contempt for government that we still have to deal with. Bush wrecked our foreign policy and killed thousands of our own and hundreds of thousands of others — don’t dismiss that by announcing that you survived his reign. Who knows what chaos Trump will sow, but people will be hurt. They will be hurt right now. Black people are being murdered by the police, immigrants are being oppressed right now, and we do not have the luxury of waiting the new regime out. It is not consolation to say that the pain will be selective and that the survivors will survive.

That’s exactly what has led to this situation. We need to stop engaging in this fine-grained balancing act where we try to ‘triangulate’ and build coalitions of the barely tenable, because it leads to fragile support that can be disrupted by one loud-mouthed boor who promises to break everything.

At what moment did the victimization of untenured academics become OK? » « DAMN YOU. GOD DAMN YOU ALL TO HELL.