Ken Ham took Bill Nye on a personal tour of his big ol’ fake boat, and they argued some. I think Ham came away with the idea that he won. 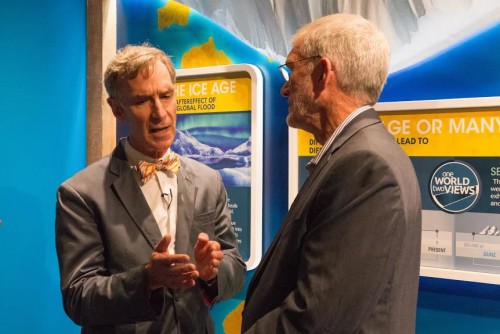 We’re glad Bill Nye took me up on my friendly offer to show him the Ark. During his visit I was able to personally share the gospel with him very clearly. On the first deck, I asked him, before a crowd of people including many young people, if I could pray with him and was able to pray for him there. Our prayer is that what he saw will have an impact on him and that he will be drawn to the gospel of Jesus Christ that is clearly presented at the Ark.

Many people have tried to share the gospel with me, as well, and it’s never been done clearly. It can’t be done clearly: have you ever read that Jesus story? It’s an incoherent mess, and makes no sense. Now maybe Ham performed a miracle and and explained it lucidly, but I rather doubt it: I’ve listened to him and his usual approach is to condescendingly talk down to people in that sing-song voice he uses when preaching to children.

I’d also tell Mr Ham that prayer doesn’t work, and that his whole pointless project is saying that we’re going to win, and he’s going to lose.

Look at this detail from a display in this photo: One world, two views. I can tell already what theme he’s hammering on in the Ark Park, and it’s the same one he repeats over and over again in the Creation “Museum”. We’re all using the same evidence, he claims, and the only difference is in the interpretation, which in their case is informed by evidence the scientists reject, the literal testimony of the Bible.

It’s a lie. They ignore most of the evidence, and what they do let in they have to twist and distort to make it fit. We’re looking at a great big jigsaw puzzle, and we’ve assembled enough of it to get a general idea of what it illustrates — a very old Earth — and what Answers in Genesis loves to do is to grab a couple of random pieces, pound them together until they mash up, and then tell you that the Bible clearly explains that this mangled cardboard shows that the Earth is very young. It’s frustrating to listen to, and touring his “museum” is an exercise in chronic irritation, as every exhibit is a dishonest mess, all justified with that pathetic excuse of One world, two views, and hey, this is just our opinion, and it’s just as valid as everyone else’s. Only it’s not. AiG doesn’t get to have their own facts.

But this is also their weakness, and how we’ll win, eventually. Their big, expensive projects are monuments to the fact that prayers and the Bible are not enough, and they know it. They desperately desire to have evidence on their side, to the point that they have to start inventing their own and misrepresenting the facts.

Bill Nye is not going to be persuaded by the fake Ark, because he knows what the actual evidence is, and seeing the place lying at every point is the opposite of persuasion — it’s active dissuasion to anyone knowledgeable at all. It’s a giant affirmation of ignorance, and so the ignorant will revel in it, while everyone else will be repelled.

This is why I’m not afraid to encourage scientists and atheists to visit: what needs to be done to correct its influence is informed discussion of its fundamental dishonesty. To do that, we need to witness it. But unless we fail to educate the public, this foolishness is ultimately doomed.

I get email » « So this is how we solve problems now