Apple had a keynote yesterday. I did not pay attention — I usually wait for products to hit the market, and then wait a year or two for prices to come down before caring much about the latest gadget — but they did something embarrassing. They made a big deal about an app called “Breathe”. It’s a mindfulness app, and they plugged it with a great big quote on the screen. 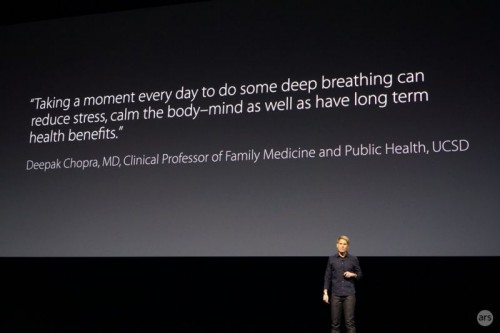 DEEPAK BULLSHITTING CHOPRA? Apple thinks a Chopraesque silly app for the Apple Watch is worth highlighting in one of their high hype twice-yearly keynotes? Well, that tells me something: that I don’t care what else was announced. It must have been mighty feeble to leave room for Chopra.

And then, it’s a mindfulness app, which has clearly become the pseudoscience fad of the year.

The value of Chopra’s own ideas and recommendations are dubious—to the point that some of his Tweets have been deemed indistinguishable from bullshit. And according to some experts, mindfulness apps are just as questionable. “Science behind mindfulness apps shows most don’t help or work,” tweeted Harvard psychiatrist John Torous, who is also the editor-in-chief of the JMIR Mental Health journal. Torous later told Fast Company that these types of apps are increasingly being investigated by experts. “These companies are very bold in their claims, and very quiet when things don’t work,” he said. “It is premature to say the mindfulness app space is well-validated at this time.”

This is actually a problem with most “mental health” apps, which a study in Nature earlier this year determined can sometimes give improper advice that makes people’s conditions worse. A 2015 study by Institute of Health & Biomedical Innovation at the Queensland University of Technology in Australia looked at 606 mindfulness apps and determined that only 23 actually taught mindfulness techniques. The rest were just timers or reminders—most of them told users to stop what they were doing and breathe.

Yeah, if you’re in the market for an app that will remind you to breathe, maybe you need this thing.

Otherwise, I haven’t seen much to distinguish mindfulness from mindlessness.

Lingerie is not armor » « One of those days…