The primary election season is fundamentally over. Hillary Clinton has won the Democratic nomination. Compared to the 2008 election, it wasn’t even close. 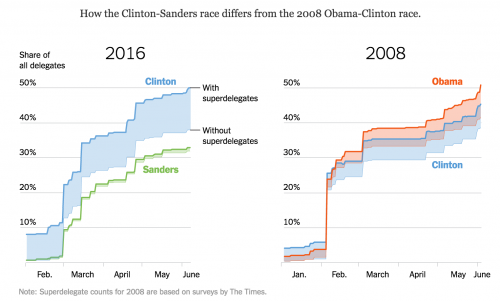 The only way Sanders can win now, and he knows it, is to get all those undemocratic superdelegates to unilaterally switch over to vote for Sanders, ignoring the popular vote, which makes them even more undemocratic. He can’t do that without betraying the a core principle of his campaign, that he’s representing the will of the people.

My wife and I are Sanders supporters. He’s the guy we want, because we want someone to shake up the status quo (in a positive way, not a Trumpian way). We stayed up late to listen to his speech, because face it, the campaign has basically been over for weeks, and his further efforts are becoming quixotic. I wanted to see the man address the reality.

He didn’t. He lost California, New Jersey, Montana, South Dakota, and New Mexico, and won North Dakota. And he vowed to fight on to the very last primary in Washington DC, which is sort of defiantly virtuous, I suppose, but it isn’t going to help. Worse, I listened to his audience, and when he mentioned Hillary Clinton (graciously!), they booed. This worries me, because Sanders has two paths to take at this point.

One, he ignores the data and goes to the convention in Philadelphia, determined to get his way, with his supporters determinedly anti-Clinton. Clinton simply ignores him, takes the official nomination on the first ballot, and starts campaigning against Trump without looking back. This is where “fighting” gets him: he loses, and he loses influence.

Two, he recognizes reality, admits he lost to the better politician, and goes to Clinton and tells her that he can deliver the general election to her — he does have a solid base of support. Then he gets concessions on the party platform, maybe has a say in the vice presidential pick, and in return pledges to campaign for her against Trump. If he wants influence, he’s got to stay in the loop with Clinton for the next six months and beyond.

And to do that effectively, he’s got to stop fighting and start working to get his supporters who are booing Hillary Clinton on board with the election that counts.

Hillary Clinton is not the candidate I wanted, but she’s competent and will be decent middle-of-the-road president. She will be a better president if she listens to and respects the voice of Bernie Sanders, and that’s what I want to see happen in the near future.

If you must… » « The future of superhero movies